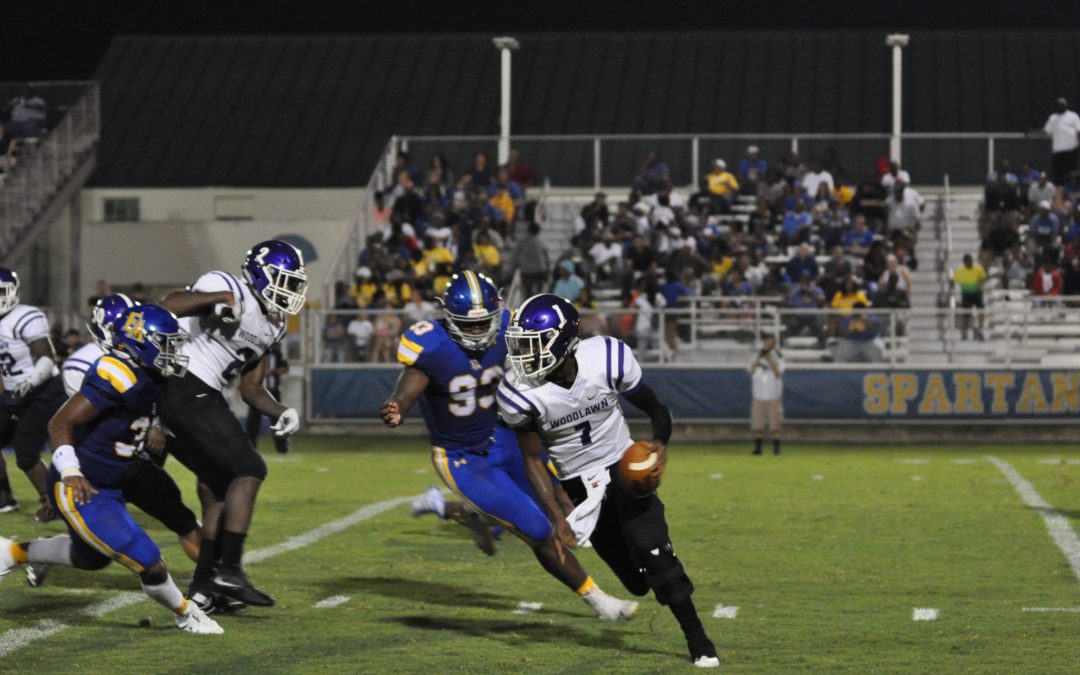 The Woodlawn Panther offense used an eleven play drive, capped by the victory formation, to seal the victory Friday night over East Ascension in the 2017 jamboree. Clinging to a one-point lead and facing a 3rd and 15, Louisiana Tech commit Xavier Lodge picked up 22 yards to force East Ascension to use their final timeouts. 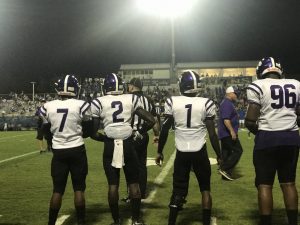 Senior captains prepare for the coin toss before the 2017 jamboree.

The Panthers only score of the night came early in the first half. After Junior Jacob Barnes’ kickoff pinned the Spartans on their own 13 yard line, the defense forced a three and out. Senior defensive back Jonathan Scott had the big play of the drive, tackling an East Ascension ball carrier for a six yard loss. The Spartans were forced to punt from their nine yard line, and when the punter mishandled the snap, senior linebacker Shaun McCray tackled the punter at the one yard line.

Three plays later, senior quarterback Brian Byrd found junior receiver Bryson Reaser alone in the back of the end zone for the touchdown. Barnes’ extra point put the Panthers up 7-0.

The Spartans were able to quickly answer, scoring on a ten play drive on their next possession. However, senior linebacker Daron Mosely was able to break through the line on the extra point attempt and block the kick, retaining the Panther lead by the score of 7-6.

The Panther defense held East Ascension’s offense to 72 total yards on the game. Woodlawn was especially stingy against the run, allowing only 11 yards on 14 carries.

The night began with the underclassmen getting a chance to play in front of a packed stadium on a Friday night. Woodlawn’s freshman team fell 14-0 to East Ascension’s freshmen. The Panthers shut the Spartans out in the second half.

Woodlawn’s JV team also fell to East Ascension’s JV by the score of 3-0.

Woodlawn will be back in action Friday, September 1 at home. The Panthers will host Live Oak in the opening game of the 2017 season. Two of Woodlawn’s service clubs, National Honor Society and Beta Club, will be hosting a tailgate beginning at 4 pm. The game is set to kick off at 7 pm. Students are encourage to wear white to the game.