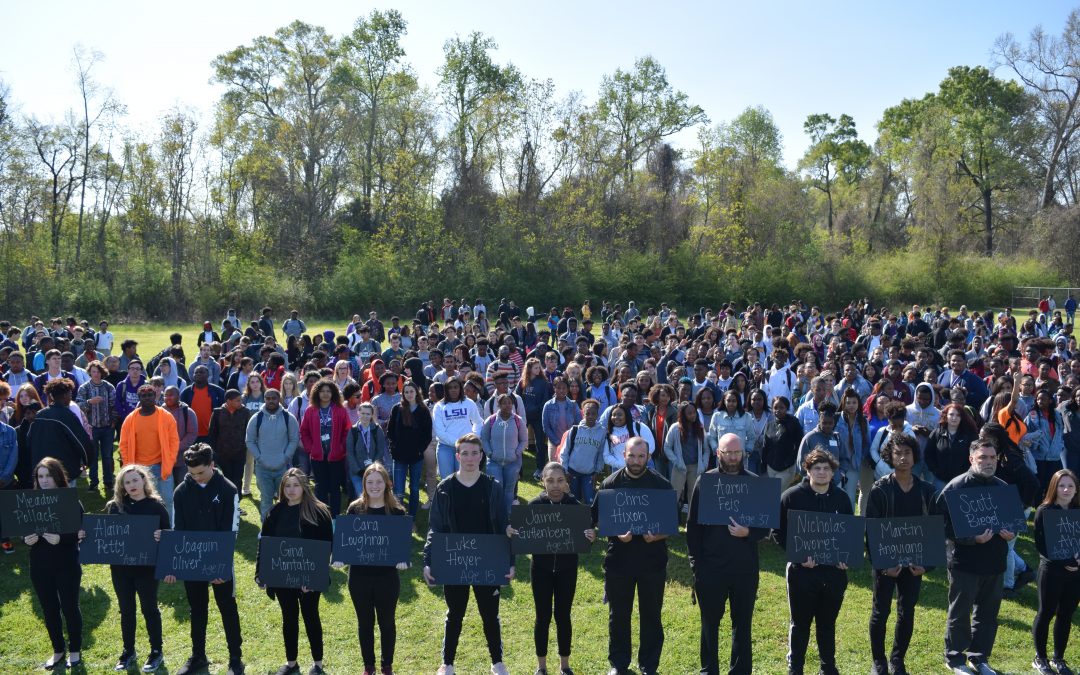 One month after the deadly shooting at Marjory Stoneman Douglas High School, students and faculty at Woodlawn High School chose to honor the seventeen people killed in the Parkland massacre.

Hundreds of students and teachers at Woodlawn left their classrooms at 10:00 am and congregated on the football practice field for the memorial and call to action. Student organizers hope that the walkout will be a call to action for Congress to pass gun control legislation while educating students at Woodlawn about how they can inspire change.

Heidi Fendlason and Briana Jacob were first approached about the idea of a walkout by teachers on campus. They quickly took leadership, organizing the event in less than two days, with the help of Hayden LeBlanc and Seryna White. 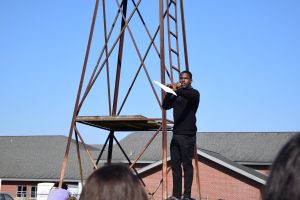 “I felt like having a walkout would have a positive change. I felt like these types of topics need to be discussed, but it is difficult to have a conversation about them,” said Fendlason. “The intent was to spark dialogue between students and teachers about gun violence, which has unfortunately become a normality in our country.”

“While we wanted to bring about change and conversation, we also wanted to memorialize the victims from Stoneman Douglas High School,” added Jacob. “By giving a visual representation using students and teachers from our high school, we thought that the impact would be greater on our students. We wanted our students to realize that the seventeen people could have been their best friends or their teachers. Also, because they no longer have a voice, we wanted the seventeen actors to be silent and we wanted to speak for them.”

Members of the Woodlawn faculty and student body stood in all black with their back to students, representing the seventeen people killed in Florida. As Jacob called each victim’s name, the actor turned to the face the crowd. Jacob read a short biography, giving the Woodlawn students and faculty insight into each of the people who had their life taken.

After the memorial, Fendlason took the microphone, emphasizing the importance of the positivity of the movment.

“The idea was to inform people on making change, regardless of your stance on gun control,” said Fendalson. “A lot of people want to help change laws, but they don’t always have adequate resources to do so, or they just don’t know how. I was trying to give them reliable sources that they could use to make a difference.”

Fendlason gave students multiple ways that they could get involved and make changes based on their beliefs. Change.org is a website that she suggested to create petitions. There is also a program called Resistbot, which you can text “Resist” to “50409”, and it will assist you in getting in touch with your local officials. Fendlason gave students information on local Congressman Garret Graves and Senators Bill Cassidy and John Kennedy, along with information on registering to vote.

“Helping lead this movement made me proud to think that we could make a difference in our community,” concluded Jacob. “We hope that students and faculty learned about things that they can do to make a change.”