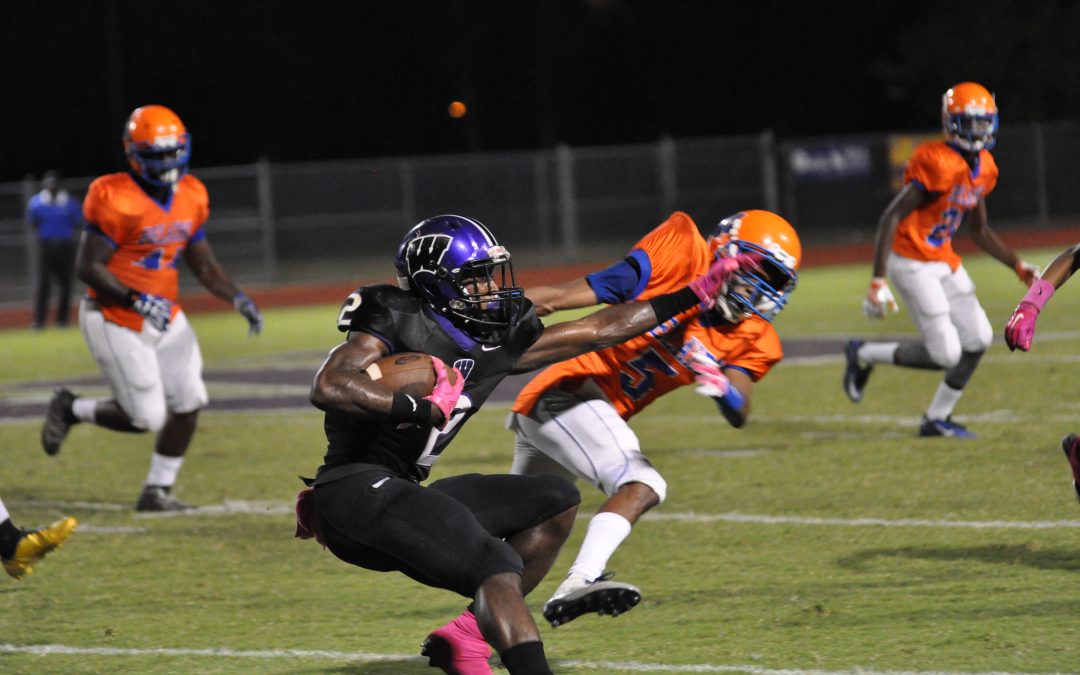 The Woodlawn Panthers picked up a win last Friday against Tara High School by the score of 41-0. Combined with Monday’s ruling that Belaire must forfeit their wins from the season, the Panthers moved to 3-4 on the season and 2-0 in District 6-4A.

After a three and out by the Panther defense, Woodlawn was quick to put themselves on the board on their first possesion when senior running back Javin Myers took the snap from center. Myers ran the ball from the eight yards into the end zone, and gave the Panthers the early 7-0 lead.

On Tara’s next possession, the Panthers forced Tara into a 3rd & 12 situation. A sack by junior Kyron Mims caused Tara to punt the ball. On the next drive, Woodlawn recovered from two incomplete passes when junior safety turned running back Xavier Lodge ran the ball 32 yards into the end zone on 3rd & 6 with only 1:32 left in the first quarter. Sophomore Jacob Barnes added the extra point, extending the lead 14-0.

The Panthers seemed to show more heart and determination in the game as they worked together to keep Tara from scoring. In the second quarter, Woodlawn continued to work hard as they gained many victories. On 1st & 20 junior Joshua London caught an interception on the 45-yard line. After the turnover, a  pass by Whiting to sophomore wide receiver Bryson Reaser set the Panthers up at the 30-yard line. On the next play, Tara attempted to intercept a pass into the end zone from Whiting. However, the Tara defensive back tipped the ball and it fell into the arms of Reaser, and the Panthers secured the lead 21-0.

On Tara’s next offensive play, the ball was snapped over the quarterback’s head and London came up with the ball at the Tara 12-yard line. Three plays later, Myers found the end zone from one yard out, giving the Panthers the 28-0 lead. After another defensive stop and a 15-yard Tara punt, the Panthers scored their fifth touchdown of the half. Woodlawn’s 35-yard touchdown drive was capped by a five yard touchdown run by Myers.

With only eleven seconds in the half and Tara threatening to score, junior cornerback Braylyn Jones, intercepted the ball in Tara’s end zone. Turning the ball over to Woodlawn. The Panthers went into halftime 35-0, confident and ready to start the second half.

Starting the third quarter Woodlawn picked up 4 first downs, by carries from Lodge and Myers, bringing the Panthers to 1st & goal. The 13 play drive led to Barnes making a 27-yard field goal. Barnes ended the scoring with a 32-yard field goal in the 4th quarter, leading to the final score of 41-0.

“They took care of business today. They did what they were asked to do.” said Head Coach Daniel Luquet. “The biggest thing is they played together. We talked about being a team that plays the game that they love.”

The Panthers will be home hosting Plaquemine at 7:00 pm on Friday, October 21. Plaquemine, who also holds the same 2-0 district record, comes into the contest with a 4-3 record. The game with feature the “Shirt Off My Back” awards, which senior players give to a teacher that has helped them throughout their time at Woodlawn. Students are encouraged to wear neon to the game. All students wearing neon who arrive before 6:30 pm will be admitted free.