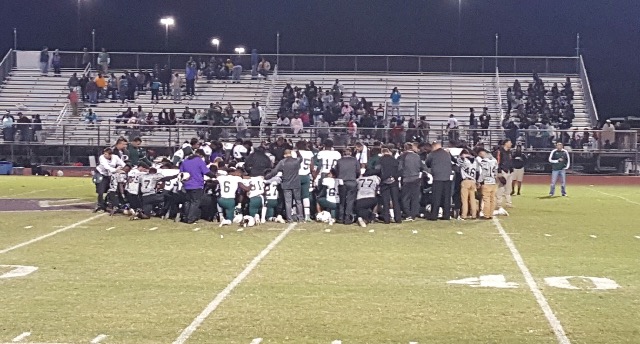 Last Friday, Woodlawn lost to the Plaquemine Green Devils. However, the loss was not the focus of the night.

In the fourth quarter, with 3:28 left in the game, junior cornerback Braylyn Jones collapsed on the field. As trainers and coaches rushed to his side, the Woodlawn Stadium stood hushed and at a loss for words. Because of the injury, referees made the decision to end the game at that time.

Waiting to hear about their teammate’s condition, many members of the football team stood by the gates while their eyes filled with concern. It was said when Jones was on the ground he could not feel the right side of his body, leaving the team worried about their brother. The Woodlawn football team often focuses on Brotherhood. The Panthers showed this Friday night.

When the EMT finally arrived, Jones was brought to the hospital where they took CT scans and X-rays.

“When he left the field, he could move his legs and feet and feel everything,” said Coach Brent Broussard. “All is precautionary.” Jones was later cleared to go back home that night.

Following the night, Woodlawn students continued to show concern for their classmate. It was then reported that Jones would be fine, although due to concussion protocol he will not be playing Friday.

“Everything that had to take place, took place, thanks to Athletic Trainer Randy Gonzales and Dr. Easton,” said Head Coach Daniel Luquet. “We have to win the next two games to get to playoffs. I expect them [the team] to play with passion and play a little Woodlawn Football.”

Woodlawn will play St. Michael Friday at 7:00 pm at the Louisiana Leadership Institute.