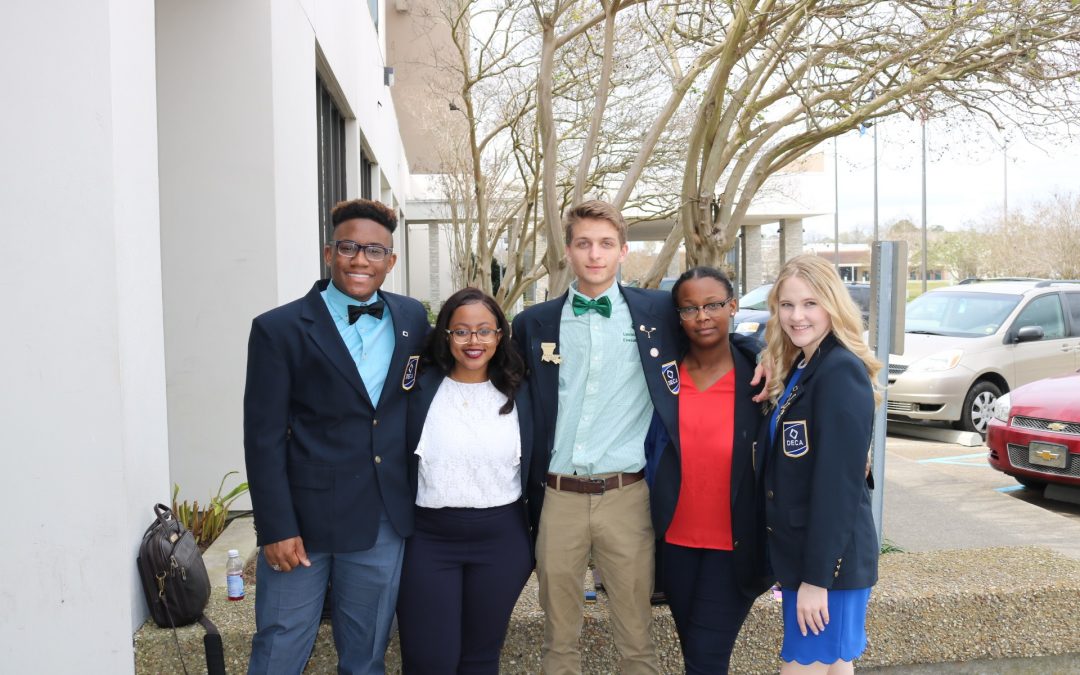 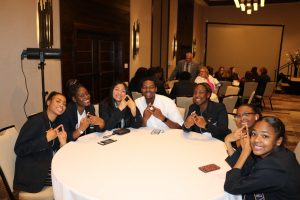 The Woodlawn DECA Chapter had a wonderful showing at this year’s conference, with many members walking away with top-three finishes in their respective competitions. All members who placed in the top-three qualify to attend the International Career Development Conference in Nashville, Tennessee.

Bryan Bates and Terrell Landry placed first in the Entrepreneurship Innovation Plan Category for their business plan and product presentation for “Panther Dust.” Panther Dust is a seasoning spice mixture engineered for those with high blood pressure and cholesterol. Panther Dust allows individuals to season their food while remaining on a healthy diet.

Sierra Johnson and Liniah Slater placed first in the Start Up Business Plan Category. Their idea, Fleur De Lis Cajun Kitchen, plans to bring real, original, southern Cajun food to the north. Their plan is to place the original location in Maine, and build locations from there.

Taryn Lewis, Jalyn Recasner, and Madison Ruffin also placed second in their category, which was the Integrated Marketing Campaign. The three students came up with a campaign titled Basketball for MDA, which included a raffle at a New Orleans Pelican game to raise money for the Muscular Dystrophy Association.

Mya Alford and Romonique Moore finished second in the Community Awareness Project Category for their participation in the Adopt a Road Campaign. Their presentation included an explanation of what road our DECA Chapter adopted and how their work helped to improve the local community. 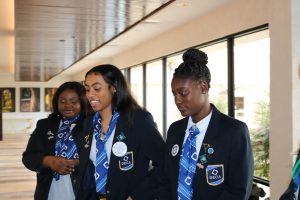 Romonique also placed third in the QuickServe Competition, which put her knowledge of restaurant management to the test. In this role playing competition, Romonique played the part of the VP of marketing for Rich Ice Cream Shop. She had to convince the CEO of the company to keep the 50th year anniversary celebration in the small town that the ice cream shop was located rather than move it to a larger nearby city.

In addition to her competitions, Romonique, who is the Chapter President at Woodlawn High, was elected as the Louisiana DECA State Vice President of Hospitality for the 2020-2021 school year.

Our DECA Chapter also received two prestigious recognitions. The first, the Outstanding Chapter award for the state of Louisiana, is awarded to those chapters who meet certain criteria. The criteria include local, state, and international DECA activities. Woodlawn’s DECA chapter completed twenty-two total activities, surpassing the fifteen activities needed to qualify for the recognition. Our chapter also received the Thrive Chapter Award from the National DECA organization, which means that our DECA chapter will be able to participate in the Thrive Academy at the ICDC in Nashville.

The ICDC will be held from April 29th through May 2nd in Nashville. 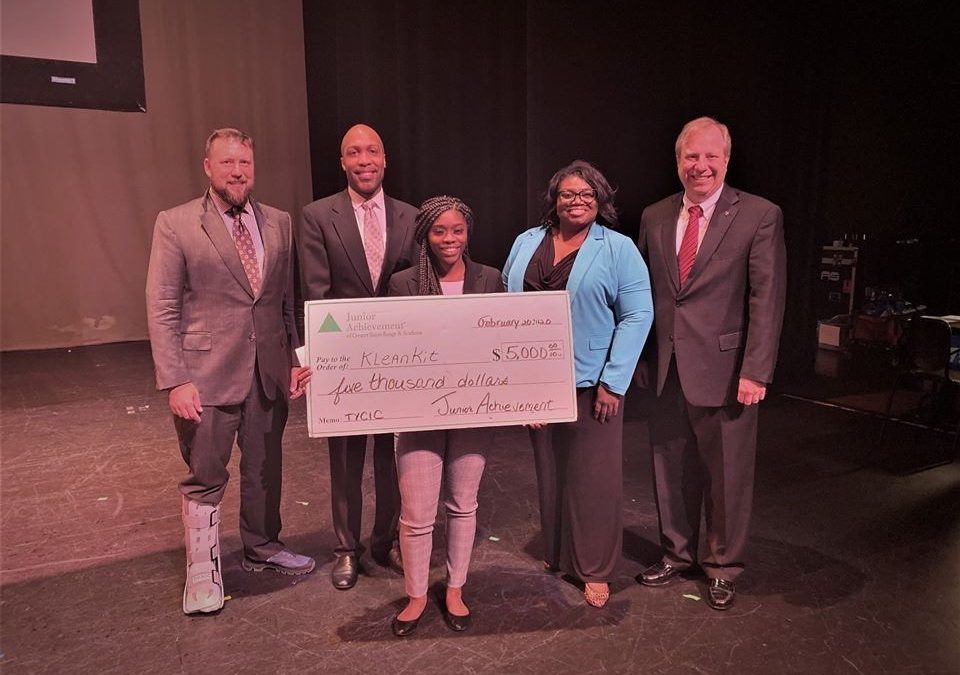 Senior Mya Alford continues to accumulate awards, honors, and recognitions. The Lady Panther basketballer, who was also named Homecoming Queen during the fall semester, has recently been on quite the hot streak. 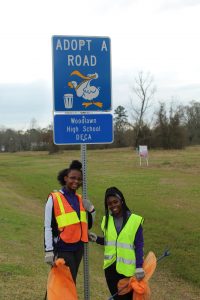 Mya competed against students from Baton Rouge Magnet High School and Scotlandville Magnet High School to win the Junior Achievement Trust Your Crazy Idea Contest. Mya presented her idea, a microwave Klean Kit, in front of a panel of judges at BRCC. Mya’ idea, which includes a cleaning solution, splatter dome, and bonnet covers, was picked as the best idea in Baton Rouge. Mya was awarded with a $5,000 scholarship and the chance to compete at the state level in Lafayette. The winner of the state contest will be awarded with an additional $10,000 scholarship.

Mya, who currently ranks in the top 10% of Woodlawn High School’s Class of 2020, plans to attend LSU in the fall. She plans on majoring in Mass Communication. Mya is active in the school’s DECA chapter, participating in recent Adopt a Road programs while serving as the Vice President of Communications for the chapter. 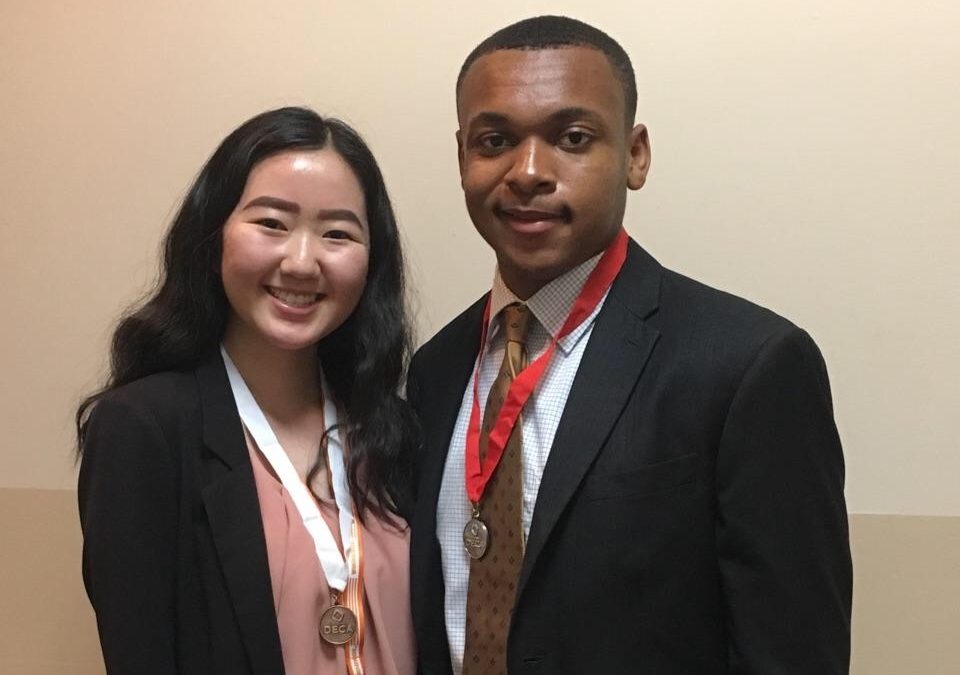 Four of Woodlawn’s most talented DECA students competed in the Marketing Internship Interview Event on the morning of March 6, 2017. After much hard work and dedication to this event, students were finally able to reap their rewards.

Raymond Vincent, a senior, took 2nd place and Elizabeth Zhang, a junior, took 3rd place. Both students are eligible to attend the National DECA Conference in Anaheim, California in April. Congratulations to both students and GOOD LUCK at nationals!