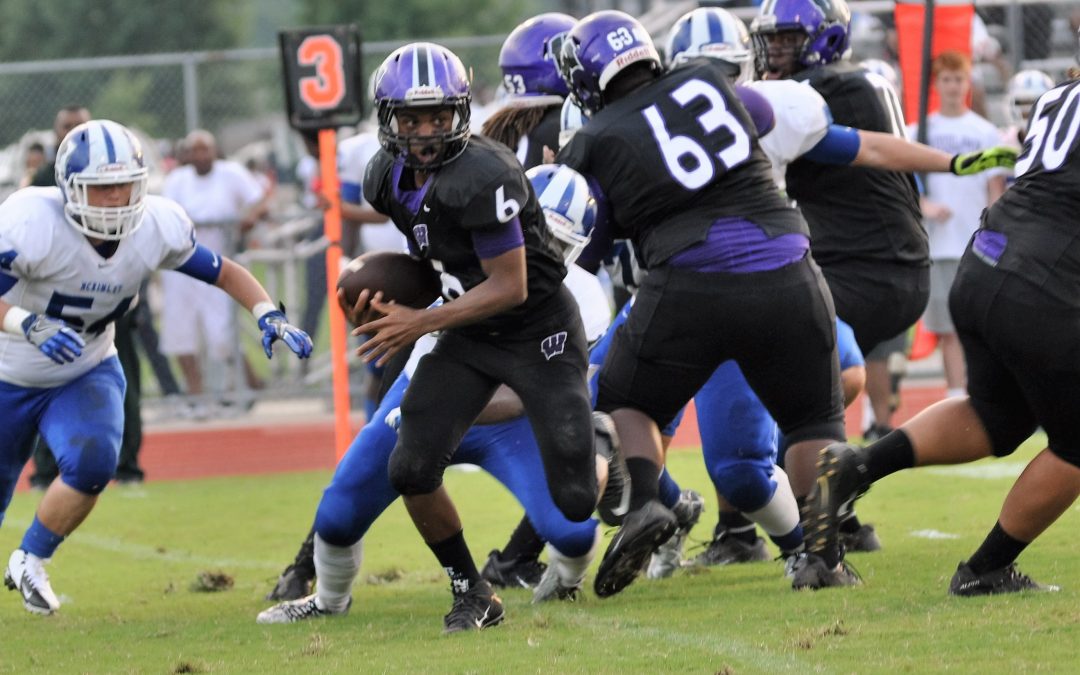 The Woodlawn Panthers suffered a 27-7 loss against McKinley in the East Baton Rouge Parish Football Kick-Off Classic on Friday night.

Although it was a rough night, it was only a jamboree which leaves plenty of room for improvement to prepare for the next game.

When asked what can be changed in order to perform better in the next game, Woodlawn Head Coach Daniel Luquet explained, “You can’t take your time, you can’t start slow… when that whistle blows and the ball is kicked off, you have to be ready at 7:00 not 7:15.”

When Woodlawn ran back out to the field for the second half, it was noticeable that they were ready to finish strong despite the slow start. 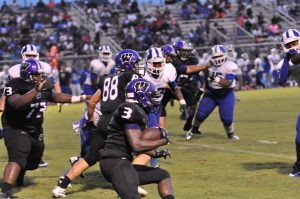 Woodlawn only allowed McKinley to score once after halftime, then senior Javin Myers had a 51-yard run with nine yards added because of a facemask penalty to set Woodlawn up at the McKinley 9-yard line.

Junior running back Allen St Cyr had a 7-yard carry on first down and then on second down, senior quarterback Devin Whiting scrambled to the left for a 2-yard touchdown pass to sophomore wide receiver Bryant Jacob. Sophomore kicker Jacob Barnes added the extra point.

In the first half, McKinley’s Josh Quiett scored the first touchdown but the team missed the extra point and took a 6-0 lead. At one point, junior safety Xavier Lodge forced a fumble from a McKinley player but the ball bounced into the arms of wide receiver Lewis Littlejohn, who scored another touchdown for the opposing team. The Woodlawn Panthers strived to turn the game around, but the ball just didn’t seem to fall into their hands like it did for McKinley.

Xavier Lodge (2) and Shaun McCray (49) combine to bring down a McKinley ball carrier.

Woodlawn managed to come together and push towards putting themselves on the board. Woodlawn senior defensive back Trey Hardnett had a 13-yard interception, but it was not enough for Woodlawn to score as the first half ended with McKinley leading 21-0.

Although the night was difficult for the Woodlawn Panthers, the team was led by Whiting, who started at quarterback due to Brian Byrd’s unfortunate injury during a scrimmage against Live Oak.

The senior completed 60 percent of his passes and showed leadership for playing his first game as the starting quarterback.

“When he trusts himself and realizes he is as good as the guys around him, he plays well,” Coach Luquet said. “And that’s what he did, he played well after he believed in himself.”

Woodlawn’s first official game will be held at Hahnville on September 2 at 7:00pm.