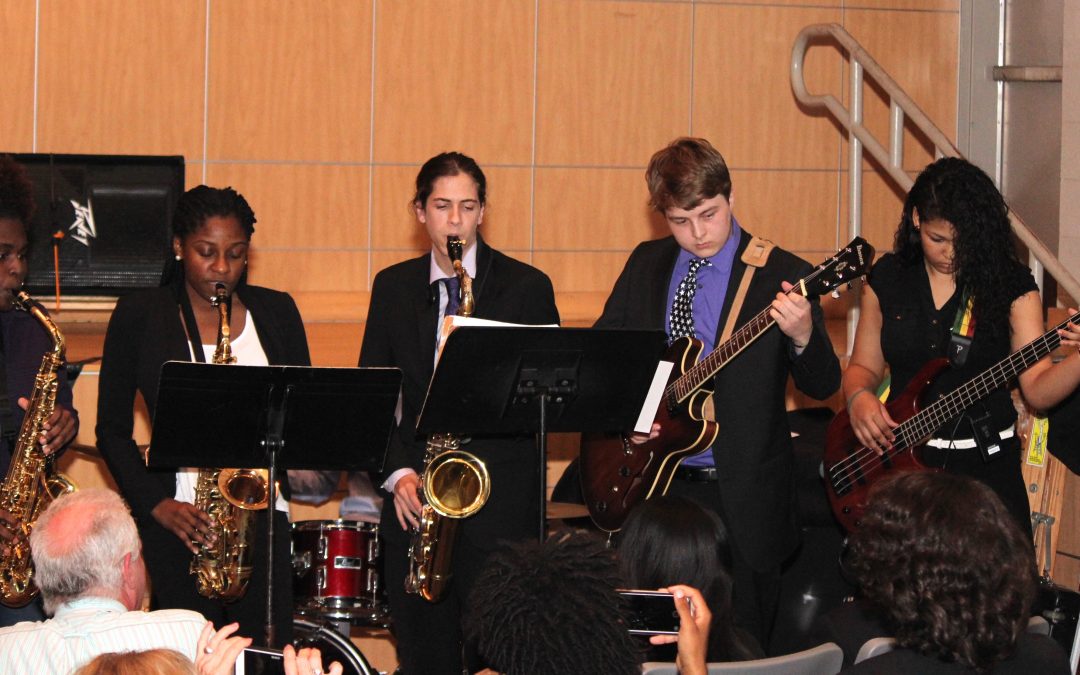 The house was packed as families, friends and district representatives attended the arts showcase hosted by Woodlawn High School’s Fine Arts Department on Tuesday, February 21, 2017 in the WHS Auditorium. The showcase, entitled “All the World’s a Stage” after Shakespeare’s play by the same name, featured visual art displays, musical numbers, theatrical scenes and performance art pieces. 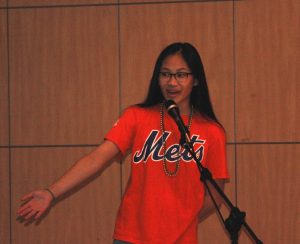 After a brief welcome and introduction by Talented theatre student, Trinh Nguyen, Lost N’ Sound, the WHS Pop A Cappello Choir took the floor, performing popular pieces such as Stitches by Shaun Mendez and Somebody I Used to Know by Goyte. With standout vocalists Jaylyn James and Shaun McCray singing, it was not long before the cameras were flashing and the crowd was singing along.

The Suave King Panthers, led by Jeroderick Allen Jr. and the Alluring Queens, under the direction of Nakavia Chapman, were next up on stage. The WHS Step Team really “stepped it up” for this performance with both whole group and separate team routines that captivated the audience with their in-sync movements and hand-foot coordination.

The showcase would not be complete without the dramatic performances of our theatre students and drama club. Members of the Theatre IV class and drama club performed in multiple scenes from classic television shows including Pet Shop, a Monty Python sketch performed by McKenzie Martin and Kennedy Sorrell and Who’s on First by Abbott and Costello, performed by Dominic Messina and Mitchell Maclean. The drama club did not forget the literary classics when Madisyn McAlister portrayed a lead role in a scene from Lord Byron’s Love Letter by Tennessee Williams. 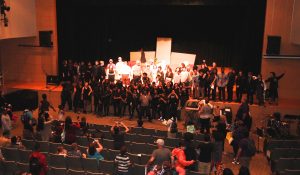 Students who participated in All the World’s a Stage receive cheers from the crowd and pose for pictures after the performance.

In the last performance of the night, The Bully Pulpit by Dwayne Hartford, the Talented Theatre students used their skills to highlight a common concern among school age students, bullying. With comedic relief throughout the performance, they were able to portray what bullying is and how it affects those involved. The showcase concluded with a curtain call featuring the entire company with a special recognition to the key players behind the scenes, Javier Allen, John Grayson Barrett, Laila Fisher, Keveyon Franklin, Matthew Jobborn, and Caleb Massarek.

The company would like you remember that “All the world’s a stage, and all the men and women merely players,” and without the support of some key players, this would not be possible. The company would like to thank Mr. Sorenson for directing the arts showcase, Ms. Samantha Jett for preparing the jambalaya, Ms. Washington for capturing the performances on camera, all program sponsors for their guidance, and family and friends that attended for their support. Also, they would like to extend a special thanks to the district representatives that attended, including School Board Representative, Jill Dyason; Executive Director of High Schools, Benjamin Necaise; Director of Fine Arts, Wayne Talbot; and Supervisor of Gifted and Talented Programs, Babs Stapleton.