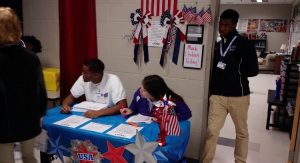 Friday and Monday, November 4th and 7th, Ms. Smoorenburg’s classes will be conducting the Woodlawn High School 2016 Mock Election. This election is open to all 10th, 11th and 12th grade students at Woodlawn. Students will be given the opportunity to vote for President of the United States, Senator of Louisiana, and the Mayor of Baton Rouge. Students will also be given the opportunity to decide on a Louisiana State Constitutional amendment concerning college tuition. Everything that students will be allowed to vote on in the mock election will be on the actual ballots on November 8th, election day. Ms. Smoorenburg’s classes ask that if your social studies classes are coming to vote, please have your permanent school ID (not a temp) ready to present to the poll workers. You must have this ID in order to vote. Results will be announced Monday, November 7th, the day before the United States will go out and vote.