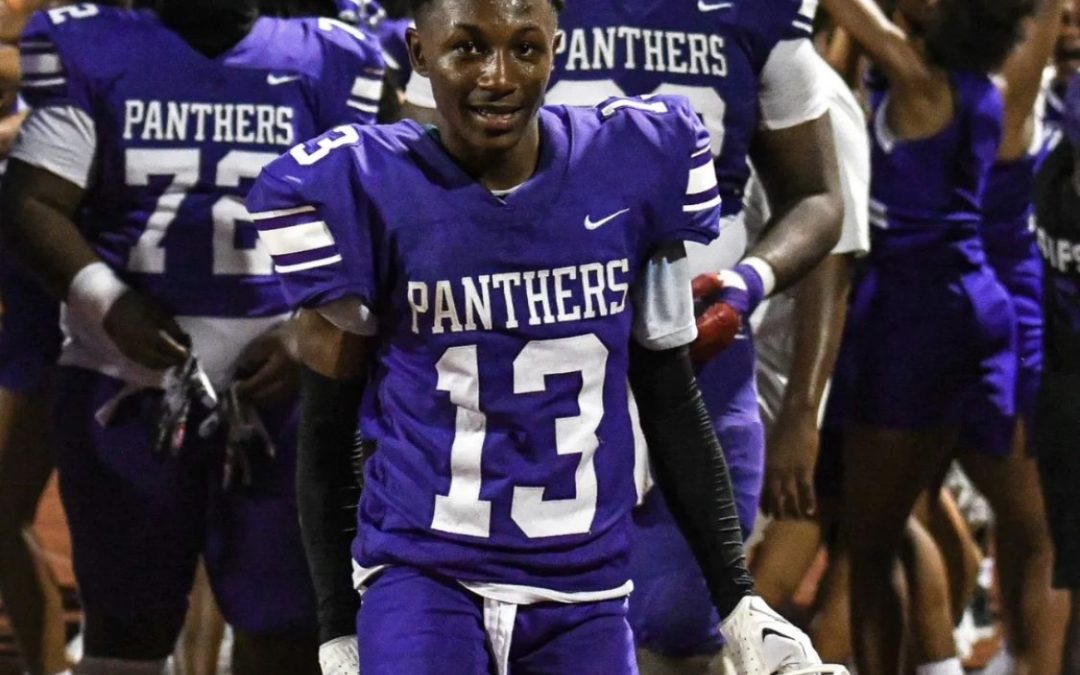 Ryan Brown’s father, Tim, shouted from the sideline two weeks ago for the sophomore wide receiver to play so clearly well that his coaches had no choice but to keep him on the field.

And as star quarterback Rickie Collins rolled to his right late Friday in need of a final score to convert Woodlawn High’s comeback into a thrilling victory, the younger Brown was the weapon waiting to rise over an E.D. White defender for the reception and twist his body toward the pylon for the go-ahead touchdown.

The Panthers (2-2) added a two-point conversion to stretch their lead to three points, then held the visiting Cardinals (3-1) to a 42-yard field goal that fell short and to the right to preserve a 29-26 win for the resilient home team that had trailed by three touchdowns just before halftime.

“The first thing I see when I line up is everybody lining up in the back of the end zone, phones getting pulled out and everything like that,” Brown said. “First we call all-hitch, but coach checked it to smash. I had the corner, and I bent because I didn’t have much space. So I went up, caught it and I’m looking down initially and thinking I’m not hit, so I twisted, caught the pylon and scored the touchdown.

For the second straight week, Woodlawn managed to weather early miscues and build its way to a dominant second half and victory.

Four early turnovers Friday dug a 20-0 deficit to the top-ranked team in Class 3A, the Division-II runner-up to end last season that had outscored its opponents by a 124-6 margin the previous three weeks.

But once the Panthers sured up their ball security, E.D. White had few answers for Collins and company on either side of the ball.

“The first few possessions the last couple games have led into turnovers that have put us in these bad situations as a team,” coach Marcus Randall said. “We saw it again going down 20-0 in the first quarter, turning the ball over three times and then having a bad snap. And that’s things that we work on all the time, situationally. But we’re just trying to find ways to start faster right now.”

Seniors Rickie Collins and Tramon Douglas II linked up for a touchdown late in the first half to help take some momentum into the locker room.

And the Woodlawn defense meanwhile continued to hold the Cardinals scoreless for more than two straight quarters of game clock to leave the door open for the comeback.

And sophomore Klayton Tate added the second and third of his 3-for-3 night of extra points, with the latter providing the Panthers their first lead, 21-20, with less than 10 minutes remaining.

“I think that’s the mark of a defense is to be able to go out and say, ‘defense wins championships,’ and have a defense that can go out and still play every play like it’s supposed to be played knowing the situation,” Randall said. “We’ve been seeing that pretty much since Game 1 against U-High. Those guys have been coming out and getting better and better at doing those things.

“We came out in that second half and didn’t give up any more points until right there at the end of the fourth quarter. We were able to come out there and get some big, quick stops and not let them eat up all the time the clock. And that’s why we were able to make the run.”

But Woodlawn wasn’t done, either, and marched its way right back downfield for Collins’ touchdown to Brown and subsequent two-point conversion to senior Clayton Adams.

“You’re looking to hit that high point in district and then looking to ride that momentum through district and the playoffs,” Randall said. “So that is a good thing to be able to say we’re not playing our best ball, but are still able to start seeing some positives from the other end in not giving up and being able to fight from behind.”

The Cardinals worked their way to the 25-yard line and allowed the clock to wind down to set up a do-or-die 42-yard field goal that missed its mark.

And the Panthers evened their record heading into homecoming Friday against St. James and district the following Thursday in a nationally televised matchup against Zachary.