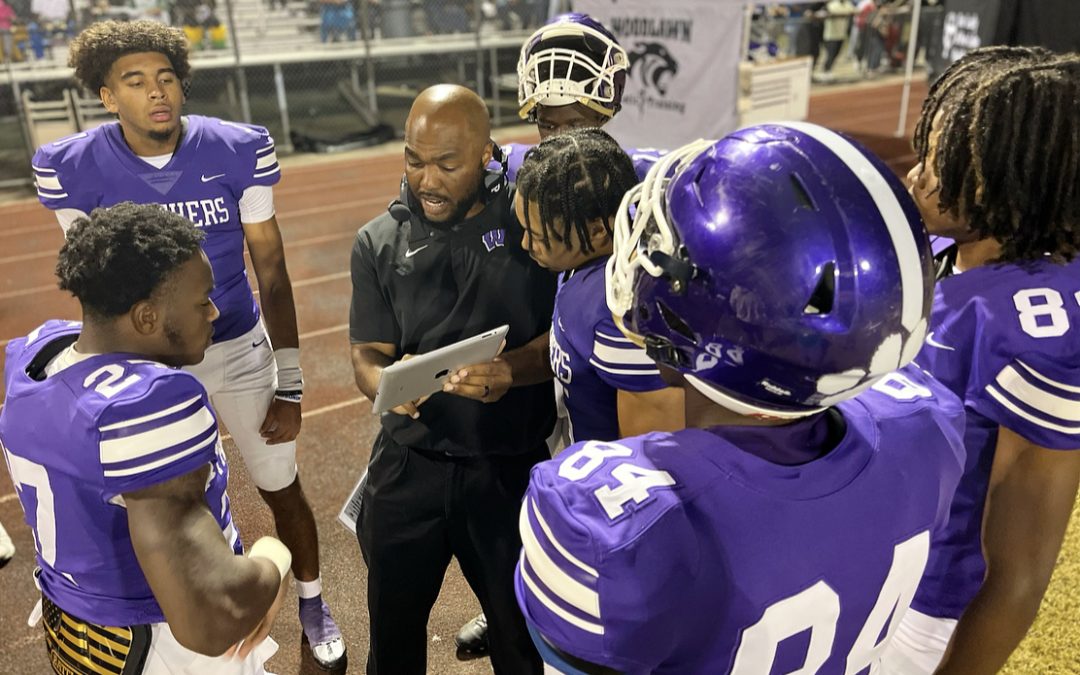 Woodlawn High appeared poised early in the fourth quarter Friday to seal away a third straight victory and kick its homecoming celebration into full-gear.

But visiting St. James (4-1) flipped the script with a swift comeback and left the home-standing Panthers (2-3) stunned as time expired on their attempted answer.

“I think that we played hard and we played to the end,” coach Marcus Randall said. “But we came out and did some things, and they made some plays and made one more play they we made right there toward the end of the game.”

The Wildcats struck first with a goal-line run by Kaden Williams to cap a first-quarter possession on which the senior running back was heavily featured.

But Woodlawn took a 14-6 lead into halftime on a pair of touchdown passes from quarterback Rickie Collins to fellow seniors Clayton Adams and Tramon Douglas II.

And the Panthers took a stronger hold with a defensive goal-line stand in the third quarter, capped by a fourth-down deflection by senior corner Jordan Matthews, and an ensuing march down the field.

Adams continued his impressive evening with a winding and powering 13-yard run through missed tackles early in the fourth quarter to a 21-6 lead after the extra point.

“This is what we’ve been looking for from Clayton,” Randall said. “We knew he was the senior receiver coming back with the most experience and the most accolades, and we’ve definitely been looking for him to have this type of game every week. But I think this is the best time for him to get hot if he’s gonna get hot as we enter district. We know we’ve got a big one next week, and hopefully we can build off of some things that we were able to build this week.”

St. James still had plenty of time and plenty of fight and big plays up its sleeves.

Junior quarterback Brayden Williams capped the Wildcats’ next drive with a fourth-down touchdown run and two-point pass to junior Kobe Brown to pull back within 21-14 with 9:10 remaining.

And senior Zaylen Brown snatched an interception plays later and retuned it 50 yards to the end zone in a stunned Panther Stadium.

Brayden Williams and Kaden Williams connected for the go-ahead two-point conversion to provide St. James a 22-21 advantage with 8:03 on the clock.

“They had that 16-point swing on us at the end, and that was really the tale of the game,” Randall said. “We ended up getting back in it. And then fourth-and-forever, we end up giving up a hook-and-lateral on a perfect play that they executed perfectly, got the first down, kept the game going and eventually scored on us right there late.”

Collins, Adams, senior running back Jay’veon Haynes and company pieced together an answer with a long drive and goal-line Collins run to pull back ahead, 27-22, with 3:05 to play.

But the Wildcats would have and make the most of the last opportunity for a full drive.

Backed into a fourth-and-21 from its own territory, St. James pulled off a highlight-reel hook-and-lateral between Brayden Williams, LSU commit Khai Prean and junior speedster Kobe Brown to keep its hopes alive.

And the Wildcats kept willing their way to an eventual touchdown from a rolling Brayden Williams to a tightly covered Kobe Brown, followed by two points on another quarterback keeper.

“We knew that was going to be a tough game,” Randall said. “And I think we came out and did enough to have ourselves a shot to win the game there, and I think (the players) know it, too. If we get the fourth-down stop on fourth-and-forever, we’re walking out of here with a W instead of an L. So that’s some of the things we’ve got to continue to work on and have been working on is just those situations in games, and this will be another one that they’ve now seen.”

Woodlawn will host reigning Class 5A champion Zachary next Thursday in a District 4-5A opener that ESPN will broadcast to a national audience.