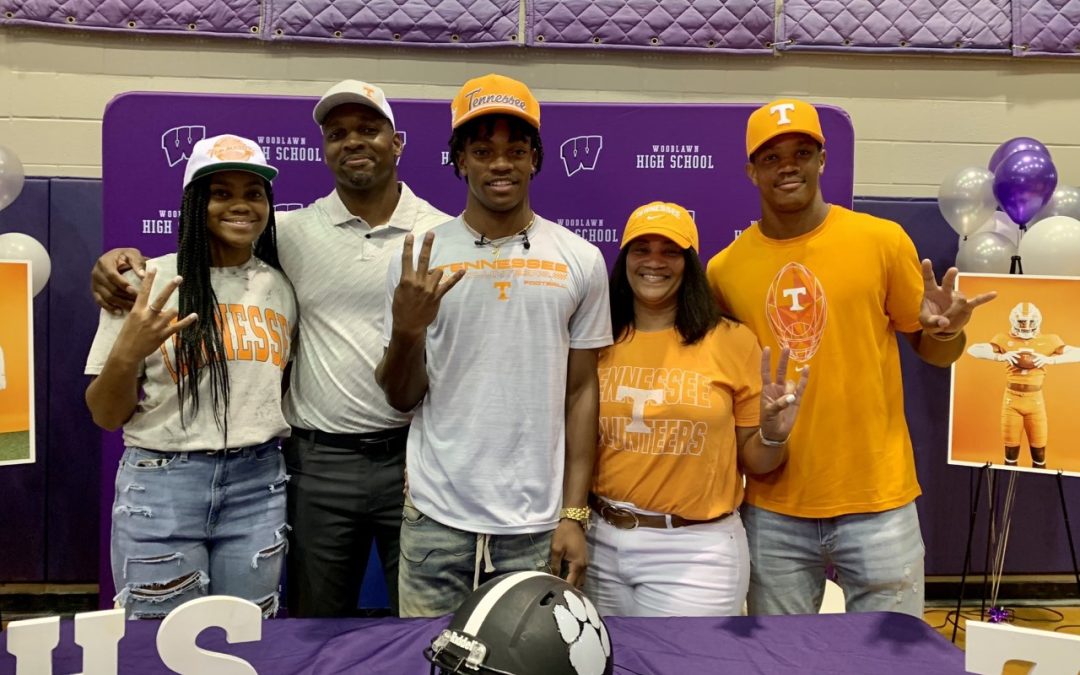 Jordan Matthews thanked a long list of family, teammates, coaches and other supporters Monday afternoon, then motioned to the back of a jam-packed and loud Woodlawn High gymnasium.

An armed East Baton Rouge Sheriff’s Department officer brought a large metal case the 80-plus feet up a center aisle between hundreds of people on the hardwood court and to the entire Matthews family at the heavily decorated purple-and-white table.

The Panthers’ senior standout unlocked the container to reveal first a bright, glowing light and then an orange hat a few shades brighter than many coaches or fans anticipated. 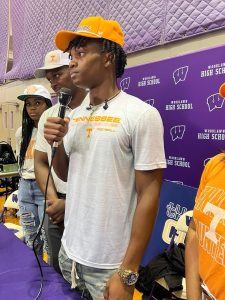 Jordan Matthews speaks to reporters after announcing his commitment to the University of Tennessee.

“As you all know we’ve been to Texas about five times now, so everybody kind of guessed it was Texas,” he explained following the dramatic commitment announcement. “But I had a change of heart. And I feel like when I went to Tennessee, it was my best visit. And I feel like in my heart that was the best school for me and my priorities for picking a school, and ultimately it came down to it.”

The highly ranked 6-foot-1, 180-pound cornerback had left all three of his finalists in the Volunteers, the Longhorns and Michigan all sweating and uncertain as he headed into the live ceremony.

“Maaaan, you had everybody fooled!” laughed Woodlawn coach Marcus Randall, admitting himself in that count as well.

Matthews, a consensus four-star and top-200 prospect nationally, chose Tennessee out of a list of 33 total scholarship offers.

His parents, Roshaun and Nicole, and siblings, Joshua and Lauryn — among the few in the know — joined him in unveiled Tennessee shirts and hats to celebrate the moment.

As with the commitment’s secrecy and execution, the timing of the event had been a carefully threaded scheduling needle to ensure the entire Woodlawn High student body and Matthews family would have the opportunity to attend.

“My team and my family, of course, are two of the most important factors that got me to where I am today,” Jordan Matthews said. “So without them being there, I felt like there would’ve been a piece missing. So I’ve got to thank those people. That was really important to me.”

As was sewing up his recruiting process prior to kicking off his senior season for the Panthers.

“Me and my parents, from when I first started being recruited, I always wanted to commit before my senior season,” he said. “Just to have it less hectic during the season and more focused to win a state championship with my brothers.”

Matthews became the fifth member of Woodlawn’s talented 2023 football class to commit to a college entering the season.

“It’s been great,” he said. “We’ve always known since our middle school days, in eighth grade when we all went to the same middle school, that we were gonna be legendary wherever we went. And we became more of ourselves and all started to get noticed everywhere. It’s been great.”