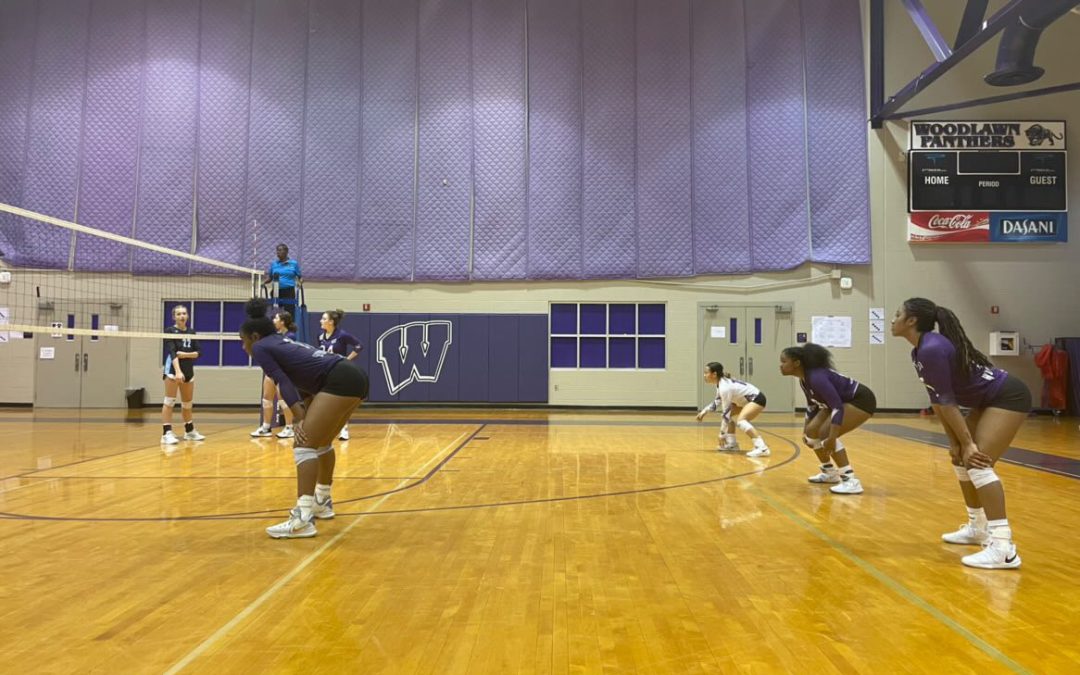 The week of September 19th through September 25th proved to be one of the busiest weeks on campus this fall. The Rumble in the Jungle Volleyball Tournament hosted over a dozen teams on Friday and Saturday, and our Panther football team hosted the #1 ranked team in Class 3A on Friday night. Tickets for all home events can be purchased online.

For the second week in a row, our Panther cross country team competed in Brusly. Woodlawn had student-athletes run in the Brusly Cinclaire Run on the Levee.

Woodlawn was led by David Ferguson, Jaden Sylvester, and Liam Dowdy. All three boys turned in solid times. Ferguson led the Panthers with a time of 23:08.64, which was good enough for a top-25 finish.

“We were not able to score as a team today,” said Coach Tim Spruill. “But the runners we had here today showed up and did work! Given the conditions, our runners did very well.”

Senior Andrea Rodriguez was the only runner for our Lady Panthers.

The Panther football team had a full week, with the freshman and JV teams hosting Denham Springs on Tuesday, September 20th. While the freshmen dropped their first game of the season, the JV team remained undefeated, moving to 2-0 with the 26-14 win over the Yellow Jackets.

On Friday, the varsity team hosted the #1 ranked team in Class 3A, ED White. The Cardinals (3-1) came into the contest with an unblemished record and quickly jumped up on the Panthers (2-2), taking a 20-0 lead midway through the second quarter.

However, Rickie Collins and the Panther offense came alive before the break, scoring on a pass to Tramon Douglas to make the score 21-7 at the half.

In the third quarter, University of Louisiana-Lafayette commit Jay’veon Haynes reached the end zone to pull the Panthers to one score.

With just over nine minutes to play in the game, Woodlawn High finally broke through and took the lead following a Collins touchdown on a designed run.

After a touchdown by ED White put the Cardinals up by the score of 26-21, sophomore receiver Ryan Brown caught the go-ahead touchdown on a smash concept. Collins rolled to his right and found Brown, who made the leaping catch and reached for the front pylon for the score. The two-point conversion was successful, when Collins found Clayton Adams in the back of the end zone.

The Panther defense once again had a strong second half, holding the potent Cardinal offense to one score. Woodlawn also forced a 42-yard field goal attempt as time expired. The kick, which would have sent the game to overtime, fell short.

Homecoming Week and all the festivities that go along with it are now upon the Panthers. Woodlawn will host St. James, a perennial state-championship contender, Friday at 7 pm.

Our Panther swim team placed 7th in the Capitol City Swim League Meet on Saturday, September 24. Woodlawn missed out on a sixth place finish by only one point.

In addition to the strong performances by these Panthers in individual races, the 200 freestyle relay team placed 5th, setting a school record! The new record holding team consists of Cador, Skiles, Trey Holiday, and Zach Lemoine.

The Panthers are back in action Saturday morning at Crawfish Aquatics.

Next up for Swim: Saturday, October 1 – Capital City Swim League at Crawfish Aquatics

For the second week in a row, Woodlawn’s volleyball team crammed as many games into a week as possible. The Lady Panthers (15-7) finished the week with seven wins to only one loss and a runner-up finish in the Rumble in the Jungle Tournament, falling to Chalmette in straight sets.

“Our varsity girls played a lot of games Saturday,” said coach Maria Gonzalez. “I know they were tired, but they sucked it up and played well, all the way to the finals. I’m proud of them.”

Two wins on Friday, followed by three wins on Saturday brought the Lady Panthers to the final matchup.

Woodlawn began the week with two wins on the road. The Lady Panthers traveled to West Feliciana on Tuesday, September 20 for a straight set victory. The next night, Woodlawn hit the road again, this time defeating Liberty in four sets.

Due to Open House being held on Woodlawn’s campus, the Lady Panthers will host Port Allen at Woodlawn Middle School, located at 14939 Tiger Bend Road.

The Panther Tennis Team will delay the start of their practice by two days. Practice, which was originally scheduled to begin on Monday, September 26th, will now begin on Wednesday, September 28th. Practice will be held at Southern Oaks Athletic Club for the fourth year in a row. Practices will be held on Mondays and Wednesdays from 3:00 – 4:00 pm.

Baseball practices will begin in October. Those interested in playing baseball who are not participating in a Fall Sport should see Coach Kohn. A valid physical is necessary to participate.