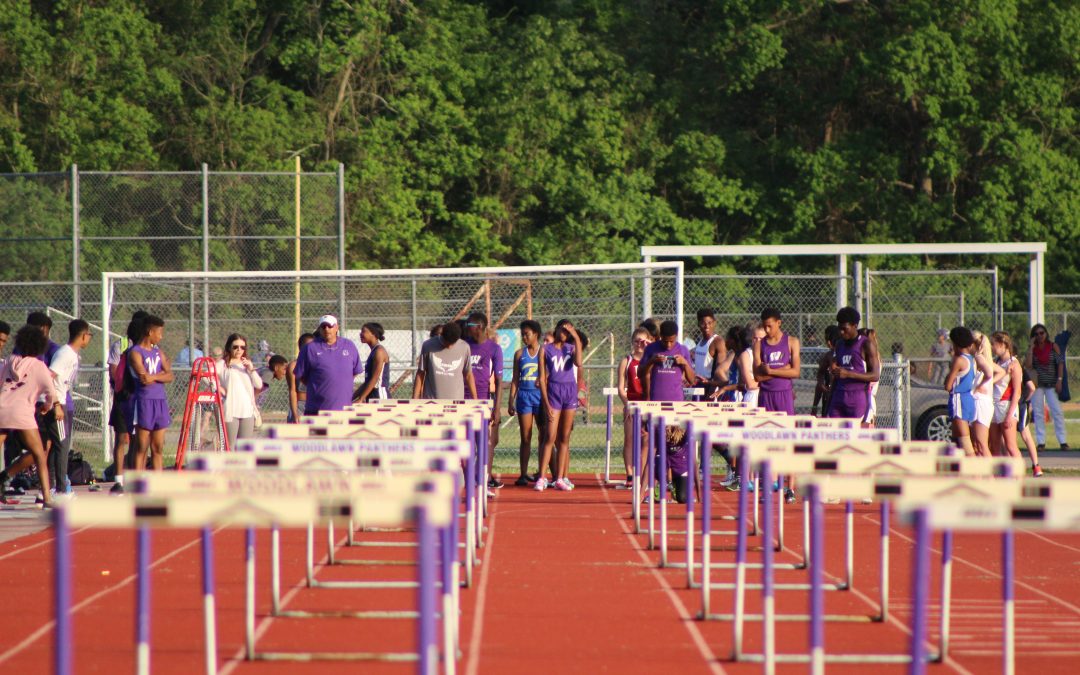 On Wednesday, April 19, the Woodlawn track team competed at the District 6-4A track meet.

The boys team finished 2nd at the district meet missing the top spot by just 9 points. 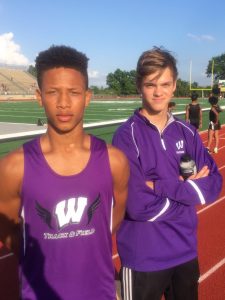 Woodlawn’s night was highlighted by four first place finishes. District champions include the pole vault by Coby Sanchez, the 110 meter hurdles by Shaun McCray, Tray Lang in the 300 meter hurdles and Nicholas Bradley, Jason Jones, Khidhr Al-Mustafa and Brandon Williams in the 4×400 relay.

Overall, the boys team qualified 12 boys in 13 events to compete at the Region 2 meet at the University of Louisiana Lafayette on April 26. The girls qualified 9 athletes in 12 different events.

Under scattered showers, the meet got off to a great start in the boys pole vault as Coby Sanchez and Million Tyler finished 1st and 2nd in the event. Sanchez posted a 9’6″, while Tyler set a new PR with a vault of 8’0”. For the girls, Mercedes Pickens finished 2nd in the event with a PR vault of 7’6”.

The girls also had a strong showing in the high jump as Diamond-Alexis Craig set a PR of 5’2” on her way to and 2nd place finish. 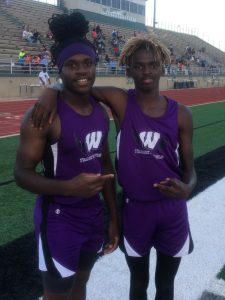 Sean McCray and Tray Lang finished 1-2 in the 110 meter hurdles.

The boys 4×200 squad of Shaun McCray, Bryant Jacob, Cameron Rogers and Bryson Reaser continued to improve as they worked their way to a 4th place finish with a time of 1:34.02.

In the boy’s race, the Panthers were led by a 2nd place finish and PR of 4:46 by senior Brandon Williams. Khidhr Al-Mustafa also ran an excellent race in one of the toughest events of the day with a 4th place time of 4:57.

Diamond-Alexis Craig ran a 52.66 in the 300 meter hurdles to claim 2nd for the Lady Panthers. 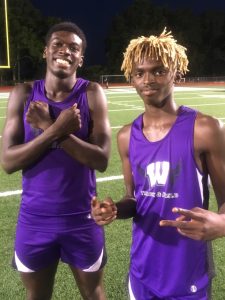 Jason Jones and Tray Lang finished 1-2 in the 300 meter hurdles.

For the boys, Khidhr Al-Mustafa finished 4th in the event with a time of 2:11.

The combination of Cameron Rogers, Bryant Jacob, Chris Frazier and Bryson Reaser, all sophomores, is proving to be formidable as they improve their best on the way to a 3rd place finish.

Senior Brandon Williams showed off a great finishing kick as he made his way to a 3rd place finish in the 400 meter dash in 51.33.

In the longest race of the night, the Panthers proved that they could go toe to toe with the best in the district at any distance. Alexis Martin, coming of top 3 finishes in the 1600 and 800, found the strength to finish 3rd in the 3200 in a time of 14:01. Freshman Aimee Martin finished 4th in 15:19. For the boys, pole vault winner Coby Sanchez took to the track and battled his way to a 4th place finish in a PR of 11:49.

The final event of the night is often the most exciting, and there were fireworks in Plaquemine as the Panthers took to the track for the 4×400 meter relay. The girls squad of Melissa Grant, Mercedes Pickens, Presley White and Ebani Adams ran a very controlled race, staying near the front until the final lap when they pulled away from St. Michael in the final 100 meters to claim a first place finish in a time of 4:34.33

The boys team of Nicholas Bradley, Jason Jones, Khidhr Al-Mustafa and Brandon Williams would not be outdone. Coming off of a season best 3:36, the Panthers roared to the front during Nicholas Bradley’s 1st leg. Tara sprinted to the lead in the 1st 150 meters of leg 2, but, Jason Jones ran a smooth leg and reeled in the Trojans with 100 meters left in his trip around the track. Senior Khidhr Al-Mustafa took the baton in leg 3, four seconds behind Tara. 400 meters later he had evened the race, and as he handed the baton to senior Brandon Williams, the Panthers and Trojans were side by side. For the 1st 150 meters, Williams settled in behind the Tara runner. Then with 250 meters to go, he fired past the Trojan and continued to extend his lead until he crossed the line in a season best of 3:29.36, seven seconds faster than their previous time and ten seconds ahead of the 2nd place finisher.

The Panther 4×400 relay team goes into the regional meet as the #1 seed in the event and they hold the 3rd best time in 4A this season.