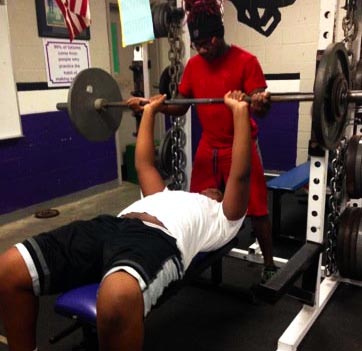 The school’s powerlifting team is starting its 2016 Campaign and they have added some new things. The season started with an invitational event here at Woodlawn on the February 9th. The team is pretty excited about the upcoming season. Brendon Ladouph is one of the freshman on the team, and he appears to be pumped about the sport, even though this is his first year doing it. Senior Tyrrell Lewis is one of the leaders on this team and is very passionate about the sport and the team. Coach Baronage (known as Coach B) is the new powerlifting coach and has a new approach to the season and how the team is going to practice and perform. “The team is full of talent and potential,” said Coach B.

Most people believe the powerlifting team members are the strongest kids in the school, but students do not have to be the biggest or strongest to join the team. The powerlifting team is full of kids who have different strengths and weaknesses. For example, a freshman probably cannot train and do the same weights as a senior or even a junior, so of course they are going to do lighter weights than some of the other guys and girls on the team. That does not mean they should not join, it just means they need some practice! If you want to join then go see Coach B in the gym anytime of the day cause the team needs more people.