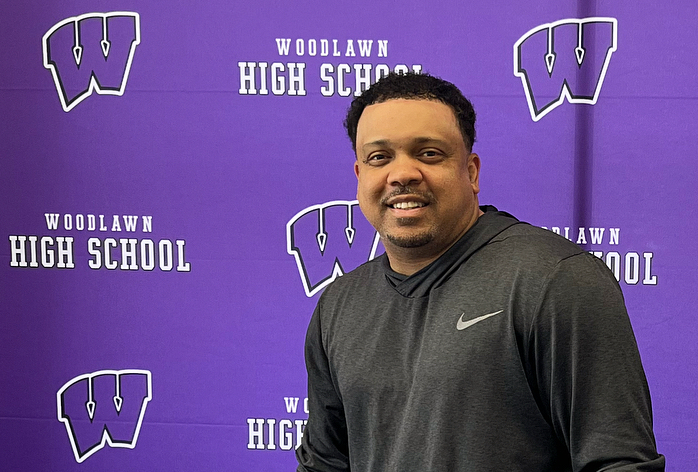 The Louisiana native, whose previous head coaching experience included a state championship appearance, officially started Friday and said he is excited to hit the ground running in preparation for the upcoming season this fall.

“First and foremost, I’m thankful to God and for my wife and my kids,” Arnold said. “Through this transition of coaching, I’ve had to lean on them a lot. They’ve been my rock. And at the same time, (principal Scott) Stevens has been great. It was a great interview. I feel like we clicked as soon as I spoke to him. I love what he’s done with the school as a whole. He’s done a marvelous job with the school. And (athletic director Brent) Broussard, we talked, and he’s wonderful. I’m so thankful for him to give me that chance to come and lead the Woodlawn Panthers and be a part of such an elite program.

“We already have a great football team. The buzz is going, and all I can see is Woodlawn just striving for excellence.”

Four years at Family Christian as an assistant from 2017 to 2020 and head coach for the 2020-21 season highlight his coaching resume.

Arnold led the Flames to a 27-14 record and Class C state runner-up finish in 2021, including the program’s first victory against perennial power Jehovah-Jireh since 2014.

But Stevens said finding the right fit toward a bright future was prioritized more heavily than past records when sifting through a pool of more than two dozen applicants.

“We narrowed it down based on a multitude of things,” Stevens said. “It wasn’t necessarily historical or what their coaching record looked like. It really was more of who do we feel based on what they submitted to us as far as a resume or (curriculum vitae), how did they represent themselves and how did they stand out as far as fitting in with Woodlawn of 2022.

The new coach said he is eager to push his players toward that ceiling in Louisiana’s highest classification and one of the state’s most challenging districts.

Arnold will meet with his his players next week and begin building relationships and getting to know his roster.

A few of the Panthers are already familiar with him, including his success at Family Christian, and are excited to get to work.

“We’re very thankful to have a coach that wants to come in and work with us, and we believe in him and believe that he can take us to the next level of becoming a successful program,” senior guard John White said. “Last year was a down season, but this season we plan on bouncing back. And we’re going to entrust in coach on leading us on that path, so we can prove everybody wrong and show that we’re not backing down from anybody.”

Arnold said his evaluation of the team’s personnel in the coming weeks and months will go a long way into determining more specifics of its identity and style of play.

But many attributes of character and effort will be non-negotiable, he said, as they attempt to lay a strong foundation for the years to come.

“I’m tough,” the coach said. “And the thing about it is they’re gonna see that I pay attention to detail. It’s gonna be a fun experience for them. I cater to my team. They don’t cater to me. I cater to what I have, and I coach that way. We are going to be exciting one way or the other. We’re going to play hard. We’re gonna compete. As you know, I have a history of really getting a team to gel quickly. And that’s what my goal is here at Woodlawn.”