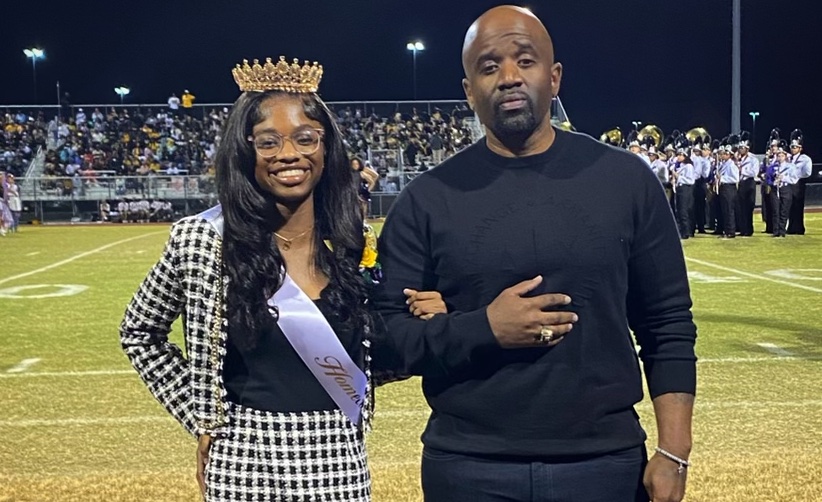 Skyler Winfrey never imagined she might be voted homecoming queen.

Not even as she walked onto the field in Panther Stadium at halftime Friday during Woodlawn High’s introduction of its homecoming court.

But then, minutes later, came to the announcement.

“I was shocked,” the senior cheerleader and track athlete said with a huge smile. “I didn’t think that people would vote for me. My other friend is well-known and has been going to Woodlawn since middle school, so I thought she would have more votes than me. But then I got the crown, and I was happy. But I was shocked. I was really shocked.”

Winfrey and senior quarterback Rickie Collins, a multisport standout and LSU-committed football player, were voted this year’s homecoming queen and king by their classmates and faculty.

The entire weekend from Friday’s pep rally and game and Saturday’s dance were a memorable experience, Winfrey said.

“I was (on Cloud Nine) all weekend, because every time anyone would see me they would say congratulations,” she said. “It made me feel really good about myself. Like the student section, I went over there and they all said congratulations.”

Winfrey’s goals for senior year included raising her GPA to ensure her acceptance to dream colleges Louisiana (Lafayette) and Texas Southern and working with her track teammates to win the 4×200-meter state championship in the spring.

She said she didn’t even expect to make homecoming court — let alone headline it — until a friend told her she would be voting for her.

But she was ecstatic with the recognition and to be able to enjoy the experience alongside another friend in Collins.

“It was good since I already knew him and we were already close,” Winfrey said. “I knew he was gonna get the crown because he’s the quarterback. But me being so surprised to get it, and him congratulating me and talking about how we’ve gotta walk down there together for the little dance, it was nice to be someone I already knew.”

Collins was announced as homecoming king earlier Friday at the pep rally, but said the significance didn’t particularly register until a conversation with his mother later in the weekend.

“I didn’t really look at it at first like it was a big thing,” he said. “But now that I really look back on it, a lot of people can’t say that they were homecoming king. That’s a pretty big deal in high school.”