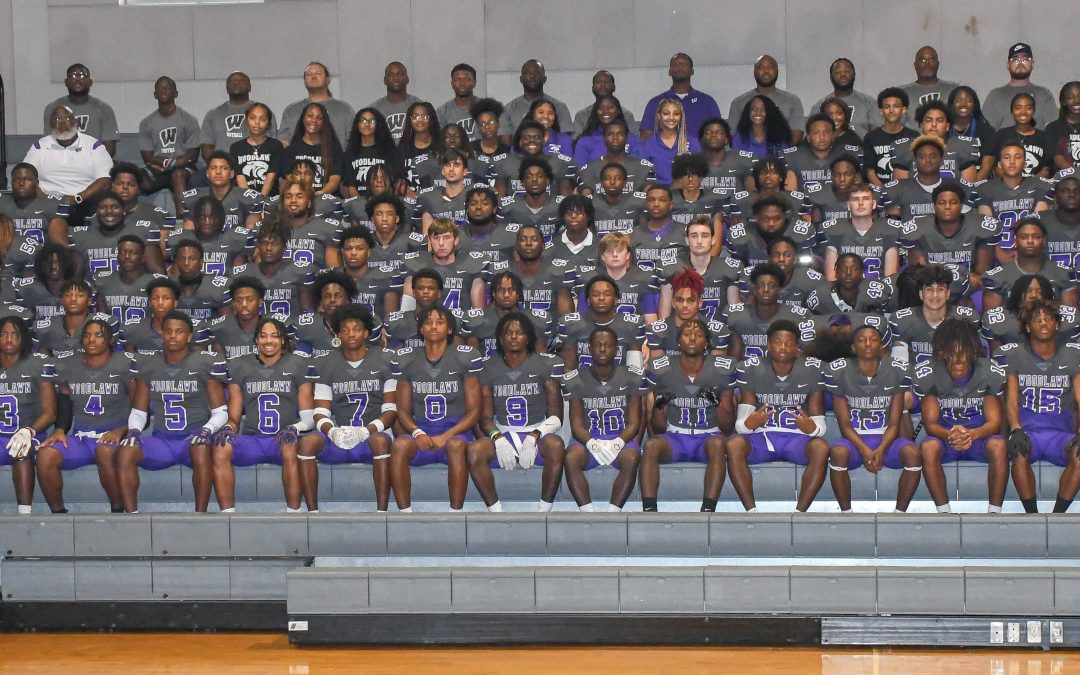 Rickie Collins stood outside Panther Stadium four days before Woodlawn High’s first day of classes and stared at the nearly three dozen newly raised senior banners lining either side of the entrance.

“Maaan,” the star quarterback said, himself almost in awe of the team’s deep and decorated 2023 class and their journey this far. “We’ve got to go to the Dome this year.”

The Panthers officially kick off their football season Thursday, a day earlier than scheduled, against crosstown foe University Lab.

Woodlawn will “host” the Cubs at 7 p.m. on East Iberville’s turf because of the constant August rain’s impact on its own field conditions and further storms forecast for Friday night.

But, those adjustments aside, the opportunity coach Marcus Randall and that senior group see for themselves in the months ahead is one they consider already three or more years in the making since arriving together in 2019.

“Having a plan of putting Woodlawn on the map and changing the culture around here not only on the football field, but around the school, I think that was some of the things we wanted to do,” Randall said. “And we’ve seen those changes… and obviously we’ve started winning some ball games. We were district champs last year in 5-5A, and that was one of our goals. And now we want to take that next step forward in being state champs.”

Those players helped lead the Panthers to five wins in their final seven games last season, including the program’s first playoff victory since 2010.

But Collins and company have remained hungry for loftier goals as they attempt to further cement their legacy.

“I think about it every day,” LSU commitment said. “Because our whole plan from jump was coming in here and leaving it better than what we found it. And I think we changed it around, but we didn’t get to the ultimate goal yet, and that’s to win a championship. So I feel like that would leave a good legacy for us, for this class.”

The players recognize the target on themselves that arrived — largely — with a message-sending 35-28 stunning of Catholic (Baton Rouge) last October and has increased with each recruiting headline the past several months.

But they point to the sting of their season-ending losses the past two postseasons as all the lesson they needed to understand how thin the room for error can be against top competition.

Fellow lineman Devyn Jones pulled teammates together following a frustrating scrimmage showing two weeks ago against Denham Springs and scolded for a lackadaisical performance before coaches even had a chance to do so.

After Randall’s postgame address to the team, Collins asked to follow and further underscore the circumstances at hand and ahead.

“I feel like we’ve been competing every day in practice with high energy and high competition level,” Matthews said. “We got off to a shaky start in the scrimmage, but I feel like we’ve already progressed and are working through some kinks. The (lightning-canceled) jamboree was gonna be a test to see where we were, but I feel like that extra week of practice is going to prepare us even more.”

Senior defensive lineman Mark Fielder recently asked Randall how these Panthers compared to the star-studded Southern Lab teams he coached to Division-IV state titles in 2015 and 2016.

The Kittens suffered their own share of playoff heartbreaks in the years prior before finally breaking through for dominant trophy runs.

“Every team is different,” the coach said. “Every team has its own identity. So I think this is a unique team. This is the first group since I’ve been coaching that I’ve been able to be around for four years. I was two years at Southern Lab, three years at Scotlandville, two years at Tara. This is my fourth year here, so this 2023 class is very, very special to me, because they all came here with me to start the process with me. And they’ve done some great things here. But now we need to finish this thing off.

“This class actually does remind me of that group that we had over there. But we’ll see. It’s still unique. A lot of these guys have played on a higher level. That was 1A, and this is 5A, so the challenges have been a little bit greater. And I think that this group has taken on those challenges and exceeded them already. And we need to take it to the next level.”

Former Southern Lab stars such as linebacker Damone Clark, who went on to LSU and now the Dallas Cowboys, have kept in touch and shared their support.

And Fielder and Matthews both emphasized how meaningful the Woodlawn players, many of whom grew up admiring members of those teams, consider those comparisons and connections.

But the Panthers’ seniors are also as quick as anyone to point out that their work toward the same status remains unfinished.

“It’s a great feeling because a lot of those guys went on to play in college and some even in the NFL,” Matthews said. “And some of them I know personally and they tell me, ‘Y’all are building something special at Woodlawn, and that’s gonna prepare you guys to even do it in college.’ So I think we have the talent to make a championship run. It just all depends on our player leadership and how great we execute on the field.”