Panthers Offense Heats Up to Lead Woodlawn to 4-1 Record 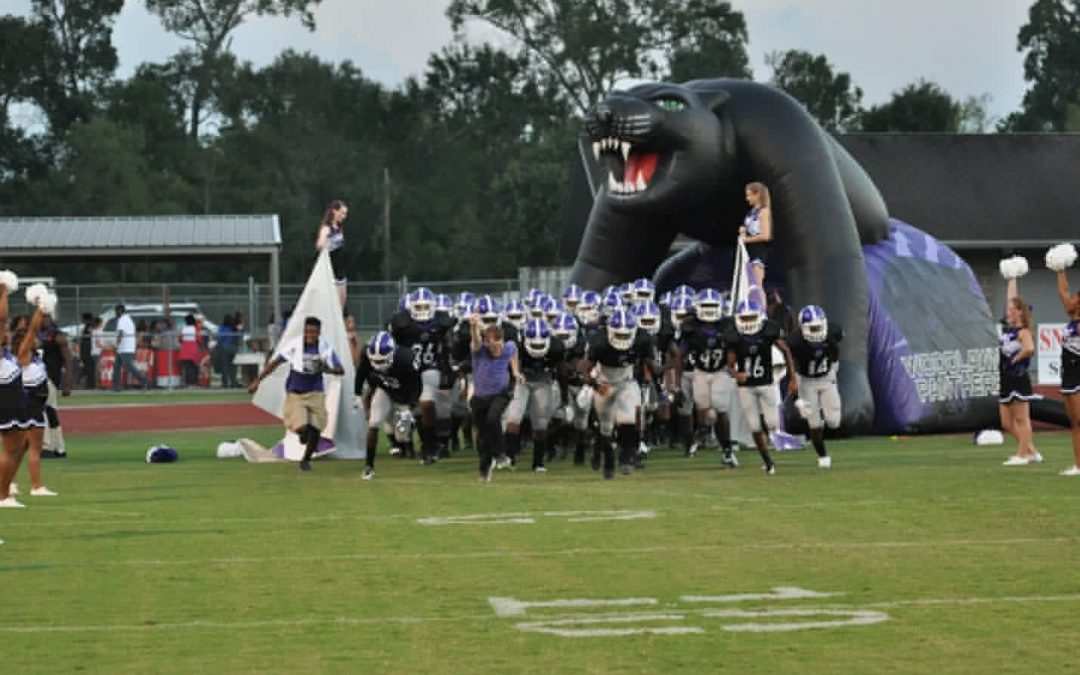 Through the first two games of the 2017 football season, Woodlawn’s offense struggled to find it’s rhythm. The Panther defense continued its solid play, but Woodlawn’s offense turned a corner and found its scoring groove over the last three weeks, averaging 40.6 points per game in the final three weeks of the pre-district schedule. 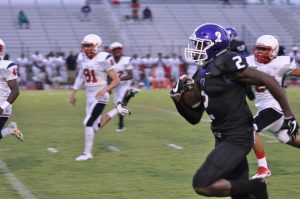 Xavier Lodge returns the opening kickoff for a touchdown versus Lake Area New Tech on September 22, 2017.

In week three, the Panthers used a dominating rushing attack to outscore the Buccaneers 45-0 to move to 2-1 on the season. Woodlawn took the opening kickoff and marched the ball 59 yards in 8 plays, capping the touchdown drive with a four yard touchdown run by senior running back Chris Middleton for a 7-0 lead.

After the two teams traded punts, the Panther defense forced a safety when senior outside linebacker Deon’tre Phillip and senior defensive back Jonathan Scott combined to bring the Buccaneer quarterback down in the end zone for a 9-0 Woodlawn lead.

The Woodlawn lead was quickly extended when senior quarterback Brian Byrd scored on a four yard run five plays after the safety. Senior Xavier Lodge’s two point conversion made the score 17-0 with 11 minutes to play in the first half.

After the Panther defense forced another punt, senior Josh London added to the Woodlawn lead with a 23 yard touchdown run, making the score 24-0. Byrd and Middleton would each add their second touchdown runs of the half to send the Panthers to a 38-0 halftime lead.

The final score on the night came with just over ten minutes to play in the game, as Middleton found the end zone for the third time of the night, and the 45-0 margin of victory.

Middleton finished the night with 13 carries for 78 yards and three touchdowns, while Byrd added 68 yards and two scores on 10 carries. London added 133 yards on 13 carries with the one touchdown. 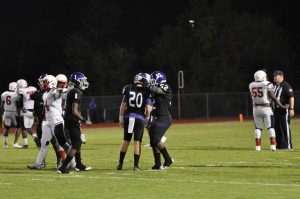 The defense held Broadmoor to 103 total yards on the night, highlighted by negative five rushing yards on 14 attempts.

Week four saw much of the same, as the Panthers defense held opponent Lake Area New Tech to 86 total yards, and negative 22 yards rushing on 18 attempts. Woodlawn’s offense was able to capitalize on great field position throughout the night, leading to the 46-6 victory.

The scoring started quickly for the Panthers, as Lodge took the opening kickoff and returned it 82 yards for a touchdown. The extra point attempt by junior Jacob Barnes was true for a 7-0 lead.

After the defense forced a punt, Byrd found junior wide receiver Bryson Reaser streaking down the right hash behind the defense for a 40 yard touchdown. Barnes added the extra point for a 14-0 lead. Lodge was able to find the end zone again in the second quarter on a six yard run, and the Panthers were up 21-0 after Barnes’ extra point. Barnes added two field goals in the second quarter and Woodlawn took a 27-0 lead into halftime.

That lead was extended on the Panthers’ first offensive play of the second half. Lodge took the handoff and raced 36 yards untouched down the left sideline for a 34-0 lead. Barnes added another field goal, making the score 37-0. Later in the third quarter, Lodge found the end zone once again for a 44-6 lead.

Lodge added a tackle in the end zone for a safety for the final 46-6 score. He ended the night with 79 yards rushing on 8 carries and three touchdowns, along with the kickoff return for a touchdown. Barnes ended the night by going 3 for 3 on field goals, hitting from 49, 47, and 39 yards.

The final game of Woodlawn’s pre-district came versus the St. Martinville Tigers.

After a scoreless first quarter, the Panther offense was able to find the end zone twice in the second quarter. Lodge scored on a one yard run, and Barnes’ extra point made the score 7-0. After a stop by the defense, Byrd found senior wide receiver Evan Puckett on a 64 yard pass for the 14-0 lead. 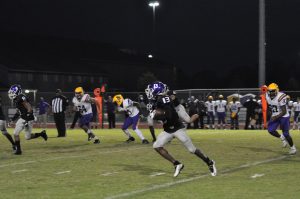 Braylyn Jones looks to pick up yards on a punt return versus St. Martinville on September 29, 2017.

The Panthers came out to start the half and found the end zone on the first drive once again. The 45-yard drive was capped by a five yard carry by Lodge, and the extra point made the score 21-7.

Barnes added a 43 yard field goal for a 24-14 victory on the first play of the fourth quarter. After St. Martinville added another score to cut the lead to 24-21, the Panther offense answered the bell again. A ten play, 68-yard drive that ended on Middleton’s five-yard touchdown run gave the Panthers their final score of the night and ended the scoring at 31-21.

The Panthers will host St. Michael Thursday, October 5 for Homecoming. All parents, students, faculty, and alumni are invited to attend the tailgate starting at 5:30 pm, followed by the game at 7:00 pm.