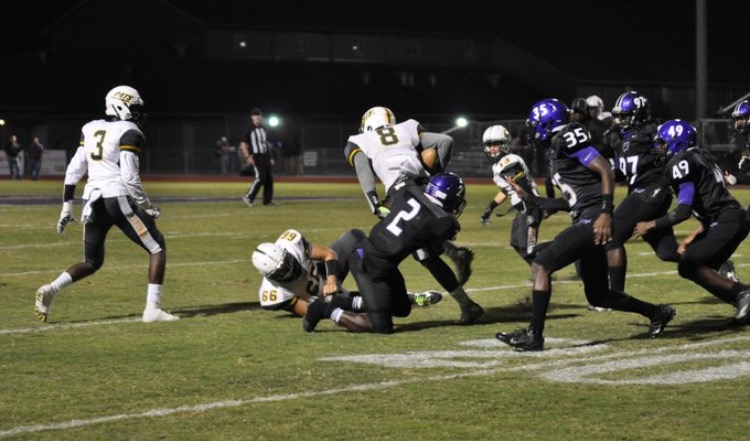 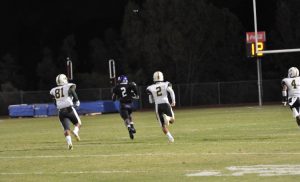 Xavier Lodge runs away from Livonia defenders for a touchdown on November 4, 2017.

Last Friday, Woodlawn was defeated by the Livonia Wildcats by the score of 49-34 on Senior Night. Despite the loss, last Friday might have been the best game the Panthers have played all season, as they were aggressive and strategic.

“Maybe we ran out of gas at the last minute, maybe not. But I’ll tell you what, they fought to the last minute,” said Head Coach Daniel Luquet. “This is what Woodlawn football is supposed to look like. Maybe not on the scoreboard, but effort wise. I can’t ask for more.”

After one quarter, Livonia led 20-0. Despite Woodlawn’s struggles to get on the scoreboard, the Panthers pushed to get the ball down the field. A pass on 4th & 9 from freshman quarterback Joshua Serio on the 39-yard line gave sophomore wide receiver Bryson Reaser the chance to make a first down on the 13-yard pass. On the next play senior running back Javin Myers carried the ball 21-yards for the first down, setting up Woodlawn at the 7-yard line. On a direct snap to Myers on 2nd and goal, Myers found the end zone and cut Livonia’s lead to 20-7.

On Woodlawn’s next drive, junior running back Xavier Lodge ran the ball 60 yards into the end zone from the 40, cutting the Livonia lead to 27-14. Sophomore Jacob Barnes added his second extra point of the night.

The Wildcats attempted a little trickery on their next possession. With the ball on the Panther 48-yard line, Livonia attempted a reverse pass, but the ball slipped out of the the player’s hands as both teams tried to recover the fumble. When Livonia finally recovered the ball they were pushed back on the 32 yards, to their own 20-yard line. The Wildcats were unable to regain themselves before halftime when they missed their field goal attempt from 30 yards.

The Panthers took advantage of the Senior night halftime program to gather their thoughts and recuperate before running back out to the field. Ready to work, Woodlawn only allowed Livonia to gain possession of the ball once in the 3rd quarter. The rest of the time was dedicated to the Panthers moving the ball down the field. Myers and Lodge were able to carry the ball into the red zone, with the help of their brothers creating holes for the backs to run through. Myers eventually scored from the 9-yard line, adding more points to the board 34-21, Livonia still leading. 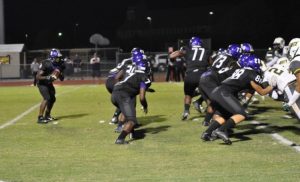 Javin Myers takes a direct snap versus Livonia on November 4, 2016.

Woodlawn wasn’t done there. On the next kickoff, Reaser recovered the onside kick by Barnes, giving the Panthers the opportunity to score again. On 3rd & 8 Serio handed the ball off to Lodge as he shook through the crowd of defenders to find himself running into the end zone, scoring yet another touchdown for Woodlawn. Barnes added another extra point, and Woodlawn was now only down 34-28 heading into the 4th quarter.

The Panthers and Wildcats battled back and forth for the remainder of the fourth quarter, with Livonia adding a late score with under two minutes to play for the final margin of victory.

The Panthers now look forward to their first round playoff game against Neville, the number one ranked school in Class 4A. Woodlawn will travel to Monroe on Friday, November 11, for a 7:00 pm kickoff.