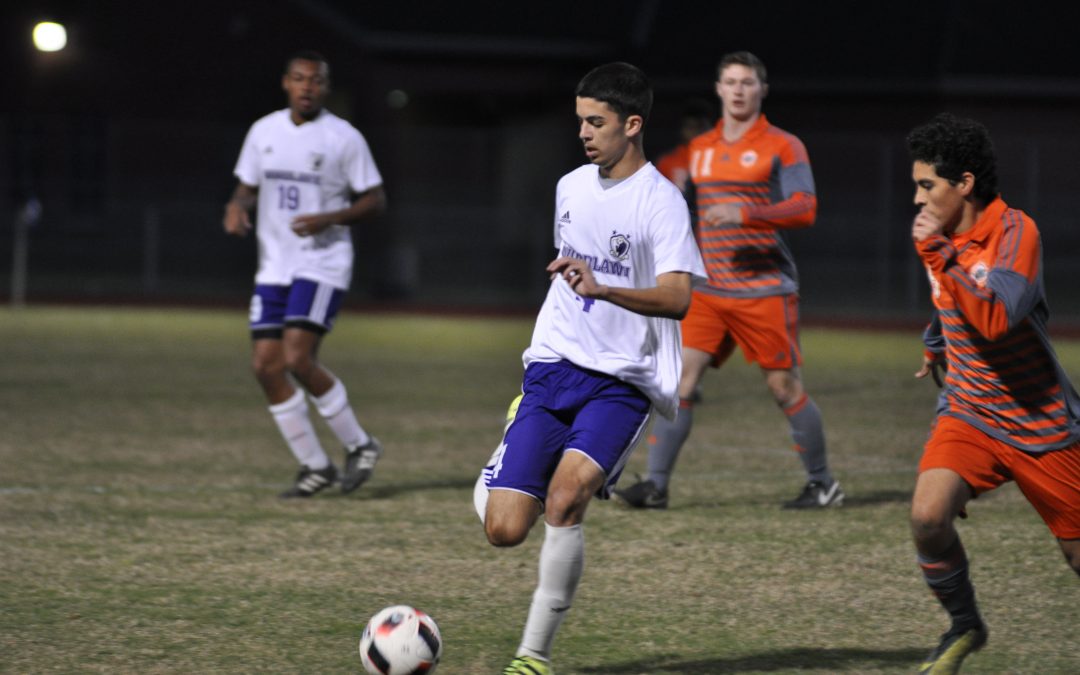 The fifth seeded Woodlawn soccer team moved onto the third round of the LHSAA Divison II soccer playoffs Thursday night. The Panthers dominated the second half of their match versus the twelfth ranked Beau Chene Gators, pushing seven goals past the keeper in the last forty minutes, for an 8-1 victory. 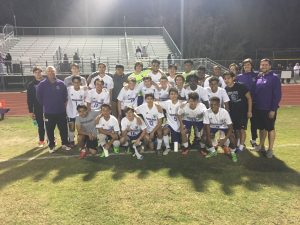 The Panthers soccer team poses after their 8-1 victory over Beau Chene on February 9, 2017.

“We hadn’t played in a little while. Having the bye is a good thing, and a bad thing. We were able to come out in the second half and actually play our game, which resulted in quite a few goals,” said Head Coach Andrew Barnes. “All in all, I’m very happy with the kids. I’m glad that we could represent Woodlawn and get the W.”

The Panthers first threat of the night came in the fourth minute. Junior midfielder Igor Castillo-Veliz put a shot off the post from 25 yards out. This would prove to be the first of many close calls in the first half for Woodlawn.

Sophomore forward Brennan Arceneaux was next to get into the action, with a shot in the fifth minute that was saved by junior Gator keeper LaTrell Beauchamp. Just three minutes later, Castillo-Veliz put his second shot on goal from the box. Beauchamp was able to make another save, but this time for a corner.

Sophomore defender J-myri George was able to get a shot off after the corner from junior midfielder Jacob Barnes, but the ball was deflected by a Gator defender and the Panthers forced another corner. This corner found the feet of senior forward Eduin Delcid, but his shot from the box was just wide of the goal.

The next ten minutes saw Arceneaux just miss from twenty yards out, Beauchamp make an acrobatic save on an eighteen yard Delcid shot, Castillo-Veliz miss a shot attempt just wide, and Beauchamp make two additional saves on Delcid shots from the edge of the box.

The offensive barrage did not stop there, but the Gator keeper was up to the task, as he saved three more shots, one by Castillo-Veliz and two by Delcid.

Beau Chene was finally able to threaten in the 26th minute, as a Gator forward was able to get past the Panther defense. As the Woodlawn faithful called for an offsides, sophomore keeper Jakarie Davis made his first save of the night to keep the score knotted at zero. 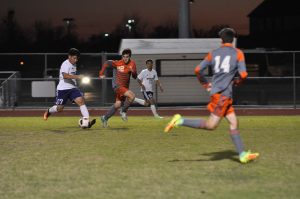 In the 28th minute, Delcid appeared to open the scoring when he slid a ball past the slide Gator keeper. However, the offsides call negated the goal. Not to be deterred, the Panthers were on the board less than a minute later when Castillo-Veliz found Delcid streaking past the Beau Chene defense. The Woodlawn forward found the back of the net for the 48th time this season, making the score 1-0. This score would carry into halftime.

When the Panthers came out in the second half, there was one notable change in the formation. Delcid, who had been playing midfield, had moved to the top of the offense as a forward.

“At halftime, Coach Barnes said that we needed to keep it up and the goals will come. He said that we were working hard,” said Delcid of his coach’s halftime message. “He moved me from midfield to forward because we felt that I could take advantage of the matchups with their defenders.”

This strategy paid off quickly for Woodlawn. Less than two minutes into the half, Barnes sent a through ball into the box. Delcid gave chase, but reached the ball with no apparent angle for a shot at the goal. An attempt at finding a teammate in front of the goal instead resulted in his second goal of the night, and a 2-0 lead.

“I didn’t have an angle, so I just kicked it toward the middle, trying to center it for a teammate. When I hit it, I just got lucky and the ball went in,” explained Delcid.

It did not take Delcid long to end any thoughts that the Gators may have had of keeping the game close. In the 46th minute, he was able to collect a ball from junior Erick Ixcotoyac in the box. From about ten yards out, the senior forward found the back of the net for the hat trick. 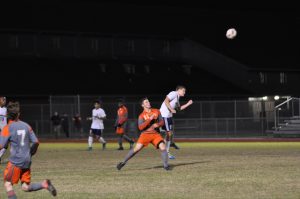 Jacob Barnes wins a ball over a Beau Chene player.

With the score now 3-0, the Panthers continued to apply pressure which resulted in goals. Castillo-Veliz took a pass from senior Alan Orellana-Gomez and finished the goal from ten yards out in the 48th minute, and Barnes scored his first goal on a penalty kick in the 50th minute, giving Woodlawn a 5-0 lead.

Over the next ten minutes, both keepers were tested, but neither team were able to score. That changed in the 63rd minute when Arceneaux was able to give the Panthers the 6-0 lead from ten yards out. The offensive fireworks were not yet done, as Barnes scored his second goal of the night on an amazing corner.

“I noticed that the back post was open on all of our corners. When we finally got a corner on the right side, I just went for it and the ball went right where I was hoping,” said the younger Barnes when asked about his goal. 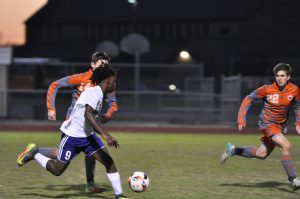 J-myni George dribbles past a defender.

The scoring ended in the 76th minute, as junior J-myni George was able to score his first game of the season, giving the Panthers the final margin of victory.

Delcid was asked about the impact of moving the speedy defender to the top of the offense.

“J-myni did a great job tonight hustling down the field. Anytime we kicked a ball long, he stretched the defense and opened up the field, allowing me free space in the middle. I was really excited that he scored the goal to end the game.”

The Panthers dominated the ball throughout the game, finishing with thirty shots compared to only ten for the Gators. The Gators one goal came in the 73rd minute, denying Davis