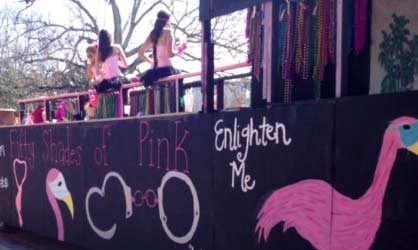 Tuesday, February 9th was the end of the Mardi Gras season. There were five Krewe parades scheduled to be in Baton Rouge, Louisiana: January 30 Krewe of Mystique and Krewe of Orion, January 31 Krewe of Mutts, February 5 Krewe of Southdowns, and February 6 Krewe of Spanish Town. An interesting fact about the Krewe of Mystique is that they are the oldest parading Mardi Gras Krewe. The Krewe of Orion is known for bringing one of a kind entertainment, family oriented fun, public service, and economic stimulation to the Baton Rouge community. The Krewe of Mutts has CAAWS volunteers elect a dog to be king, queen, prince, and princess of the parade every year. In the parade includes dogs of people who sign up to be in the parade. There is also usually the spectator’s dogs on the sidelines watching the parade as well. The 2016 theme for the Krewe of Southdowns was “Under the Big Top”. The new judges for the 2016 parade, Krewe of Spanish Town, are Whitney Vann, Laken Boudreaux, Gerald Woods, and Tom Sylvest. We hope you visited the Krewe’s parade routes and celebrated Mardi Gras!