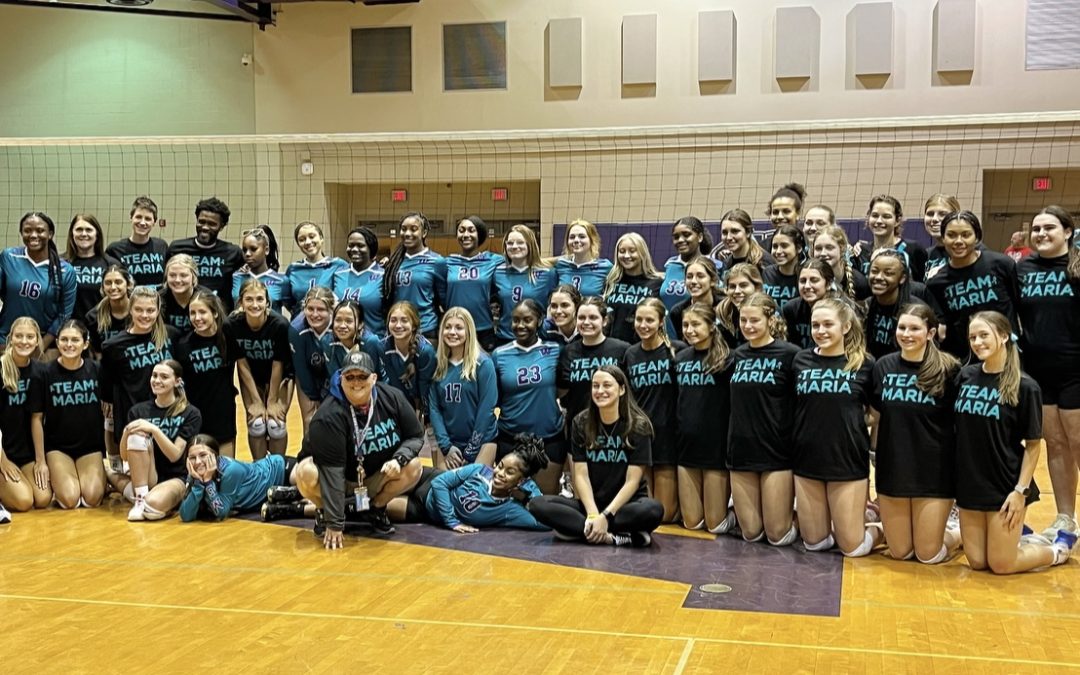 A large crowd of familiar faces past and present packed the Woodlawn High gymnasium Monday as the volleyball team and opponent St. Joseph’s warmed up in coordinated black-and-teal shirts representing “Team Maria.”

The event was the latest in an impressive show of support for Panthers coach Maria Gonzalez in her battle with ovarian cancer.

“A lot of the schools bought the shirts or donated some type of money,”  she said. “Just wow, that’s all I can say. It was really nice. Parkview did their own game and donated the proceeds. Central played St. Joseph’s last Thursday, and they all wore the Team Maria shirts and took a picture and sent it to us. And Baton Rouge High surprised us at their tournament with the same teal and ‘MG’ on the sleeves kind of like ours.

“I was not expecting all of that, so it was a big surprise to me. It was very nice. It was special. It actually made me tear up. I don’t like to tear up, but it was good. It was just neat to see so many people.”

Gonzalez said many of her former Broadmoor or club players or parents from her daughter’s old club team were among the big crowd for the match against St. Joseph’s, which the Redstickers claimed in three sets.

“Some of them, I was very surprised,” she smiled. “Some of them, I had not seen since they graduated from high school, so that was kind of a shock. That was nice, and now I’ve got most of their numbers. I was definitely surprised.”

But this year, several programs around Baton Rouge donned teal — whether instead or in addition — to support a member of their local volleyball community.

Those displays of encouragement and camaraderie have been a meaningful highlight to a season in which the Panthers have already surpassed their 20-win goal.

“This season was a good season,” Gonzalez said. “There were some days where we couldn’t practice because I had chemo or I wasn’t feeling well, but the girls have dealt with it pretty well. There’s certain things that I would look at, ‘Oh, if I could’ve been at practice that day,’ but we fought through it, did well, did the best I could, and it ended up being a good season.

“So regardless of what happens, it was a good, fun season. They’ve done great — more than I could’ve expected — so I’m happy.”