Homecoming Festivities Not Dampened by Loss 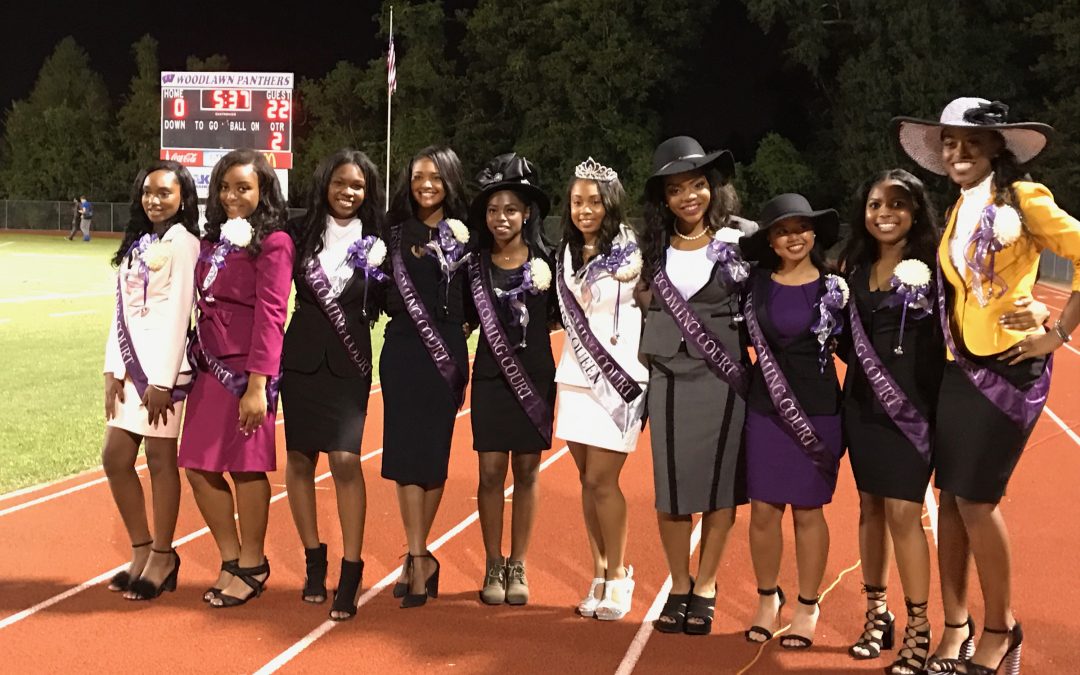 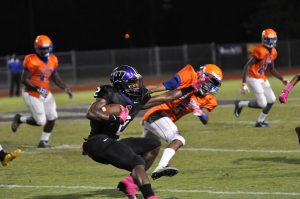 The Woodlawn High Panthers were unable to cap the week’s Homecoming festivities with a victory over Belaire Friday night. The Panthers fell by the score of 22-7 after allowing 22 first half points. The Bengals moved to 5-1 on the season while the Panthers fell to 1-5. Woodlawn turned the ball over six times in the game.

The Panthers were able to force three turnovers. Senior cornerback Trey Hardnett intercepted his team leading fourth pass in six games. Sophomore wide receiver Bryant Jacob, who was forced into action at safety after juniors Jonathon Scott and Xavier Lodge each left the game for stretches with cramps, was able to notch his first interception of the year.

Senior running back Javin Myers, playing through a toe injury, was able to rush for 142 yards on 11 carries in three quarters of action. 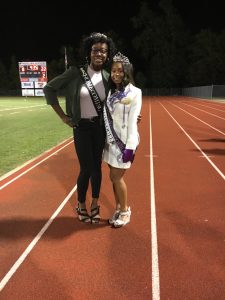 2015 Homecoming Queen Jodi Edo poses with 2016 Queen Nakavia Chapman at halftime of the game versus Belaire on October 6, 2016.

The halftime presentation of the Homecoming court left little to be desired. The Homecoming crowd was treated to the announcement that senior maid Nakavia Chapman was named the 2016 Homecoming Queen. Nakavia, who is on the yearbook staff and a member of the Beta Club and the Lambda Tau youth sorority is the daughter of Deshone and Gregory Smith. After graduating, Nakavia plans on attending ULM to get a degree in the medical field.

The Homecoming loss was the second loss in as many weeks for the Panthers, who struggled in their game against the West St. John Rams on September 30.

“The biggest thing that I struggle with is that I’ve got a bunch of great guys that I believe really care about this,” said Head Coach Daniel Luquet. “I just have to figure out how to translate what we do Monday through Wednesday at practice onto the football field on Friday nights.”

The Panthers started the game strong as Scott came away with an interception. The Panthers could not hold the Rams from gaining a 7-0 lead.

The Panthers were able to tie the game at seven in the second quarter. Junior running back Josh London set up his 2-yard scoring run with a 60 yard carry one play previous. The Panthers gave the lead up on the next drive, and throughout the remainder of the game Woodlawn attempted to gain their footing but couldn’t catch up to the Rams.

The Panthers will once again be at home Friday night as they host Tara at 7 pm.

Lillian Khemmanyvong contributed to this article.