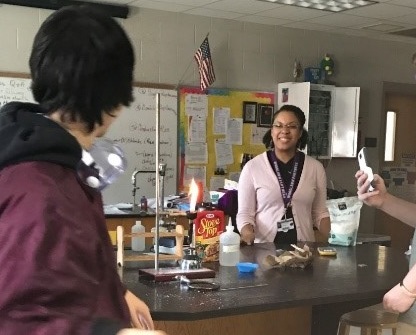 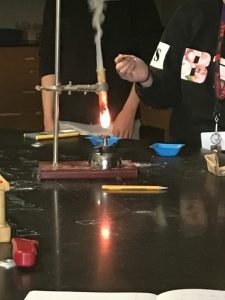 Students experiment with with different chemical reactions in Gifted Chemistry I.

The first thing they did was gather all of their materials they are going to use: weight boats, goggles, an electric scale, micro burner, test tube holder, ring clamps, sugar, candles, and a spatula.

Before they started on their experiment, they were told to make a hypothesis about the expected outcome of the chemical reaction. After the students created their hypothesis, they began the experiment.

The first step was to pour the liquid on a spatula.

As soon as the sugar was added, the concoction burst into flames, causing the students to jump back!

When they were done with this part of the experiment, the students recorded their results and determined whether or not their hypothesis was correct. The class was very engaged throughout the class period and said they had lots of fun with the experiment.