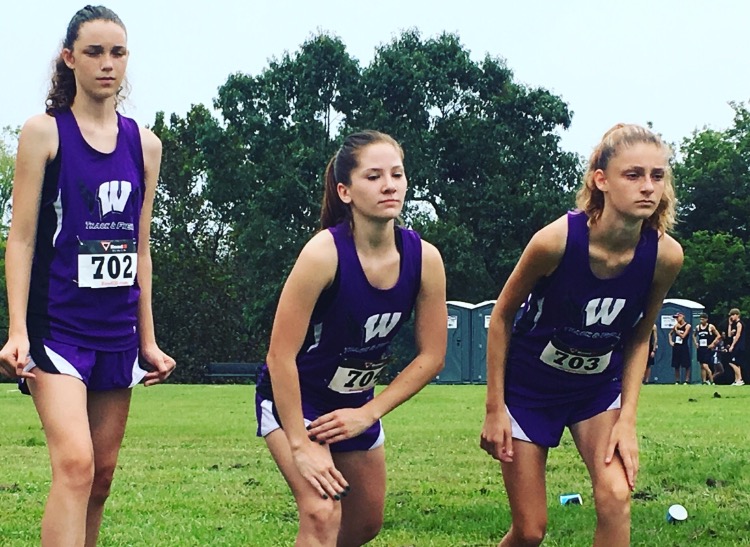 A wet race course usually equals a slow race. But don’t tell that to the 2016 Panther Cross Country team.

Saturday, at a very soggy Highland Road Park, the boys and girls competed in the LSU Invitational Cross Country meet. It was a huge day for Woodlawn as Senior Khidhr Al-Mustafa finished 10th overall and improved his three mile best this season to 17:50 on his way to a 5K finish of 18:20. It was an impressive run for Al-Mustafa as he mounted a major assault on the field climbing his way from 18th after the first mile to tenth at the finish.

Khidhr Al-Mustafa on the podium after the LSU Invitational.

Al-Mustafa kept this week’s success in perspective when he said, “I feel good about the result, but my expectation is to be better each week than I was the week before.” If he continues to improve each week, Coach Wallace believes that he will be the school record holder by season’s end.

Brandon Williams was the second Woodlawn runner across the line as he cracked the top 40, finishing 39th, and was the second Panther this season to run three miles under 20 minutes with a time of 19:36.

Senior Darmar Galvan was the third Panther across the line with a three mile time of 20:23.

Darmar commented that, “I feel like I did well this meet, a lot better than last week. We have improved a lot as a team this season and I believe will we see even more improvement in the future.”

Joshua Stephens, a junior, continues to look great and was able to push himself to a Personal best for the second week in a row.

To complete this task on a wet course is typically unheard of, thus proving what Coach Wallace says in practice, “There is no such thing as weather. There is no hot or cold. There is no rain or humidity. There is only hard work.” Joshua and his Panther teammates have stepped up to every challenge in their path so far and show no signs of slowing down now.

The Lady Panthers had some fun of their own as they tore up the turf with two team members finishing in the top 50. Junior Melissa Grant set a new personal record and was the first Panther to cross the line in a time of 25:18, followed three seconds later by training partner and school record holder Alexis Martin.

When asked about her PR run, Grant quickly brought up her junior teammate, saying, “I feel that I accomplished a goal just by keeping up with Alexis. And I know that I, and the team, will do a lot better as we keep getting better with every practice.”

Coach Wallace explained, “It is great to have two runners that can train and race together and it has been a joy to watch Lexie and Melissa encourage and motivate each other every day in practice. With these two out front and the determined youngsters we have chasing them, this is gonna be a fun season to watch.”

The Lady Panthers did not qualify for a team place as only three runners competed, but the girls are extremely excited about the upcoming meet at Port Hudson State Historic site. The girl’s varsity team will feature a full squad thanks to the emergence of sophomore Kelli Oubre, who will make her first varsity appearance, and the return of senior captain Shelby Sanchez, who has been out with an injury.