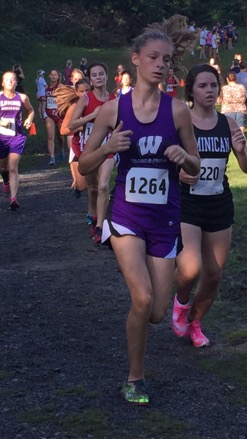 Saturday, at Highland Road Park, the Panther cross country team, due to injuries to promising sophomores Marshall Bayles and Coby Sanchez, only entered 5 runners in the varsity race. Each runner’s score would count in the team score. It was a challenge that these young men were happy to accept. Khidhr Al-Mustafa improved his time by 1:40 over last week as he finished in 18:16. Saulomon John improved his time by 40 seconds. Joshua Stephens continues to impress as he crossed the line in a new Personal Record time of 22:49. Brandon Williams and Darmar Galvan finished 3rd and 4th, respectively, for the Panthers.

Missing 3 weeks of practice is always hard on a team, but after two weeks of racing and putting in hard work during the week at practice, Khidhr Al-Mustafa has huge expectations and confidence in this year’s team.

Comments from Coach Wallace echoed that as he explained, “We’ve got talent, we just need to make sure we show up to practice with the right attitude each day and we will turn a lot of heads at the state meet in November”.

Another bright spot for the Panthers was the performance of senior Marshall Bayles in the open race. Bayles has looked great in practice the past two weeks and continues to improve his times and endurance in practice. Bayles, along with brother Mason Bayles and Coby Sanchez, will begin their Varsity season this Saturday at the LSU invitational.

The Lady Panthers also had a great day and were led by sisters Alexis and Aimee Martin. Older sister Alexis was the first Lady Panther to cross the line as she improved her time from last week by 45 seconds. Martin is just happy to be back in competitive racing after a long summer and trying first few weeks of the school year.

Alexis puts the early season into perspective as she says, “The season may have started rough and I may not have set any PR’s yet, but, as Coach Wallace says, ‘this car has no brakes’. So I’m going to continue to as work as hard as I can to achieve my goal of being the first Lady Panther ever to go under 20 minutes.”.

Younger sister Aimee, in her first ever varsity run, was the second Lady Panther to cross the line. The freshman has looked great in the first two weeks of the season and had a great summer of practice. Coach Wallace believes that she is a great addition to the team and should be prepared to carry her load on the varsity squad this year and for the remainder of her time at Woodlawn.

In the open race, senior Shelby Sanchez and sophomore Kelli Oubre looked very impressive as they work to race their way back into shape in preparation of rejoining the varsity squad next Saturday. Alexis Aucoin and Rayan Kaadan gave standout performances bettering last week’s times by over 2 minutes.

The boys and girls varsity squads will be back in action at the LSU Invitational on Saturday, September 17 at Highland Road Park. Girls varsity will run at 8:40 am, followed by boys, who will run at 9:15 am.