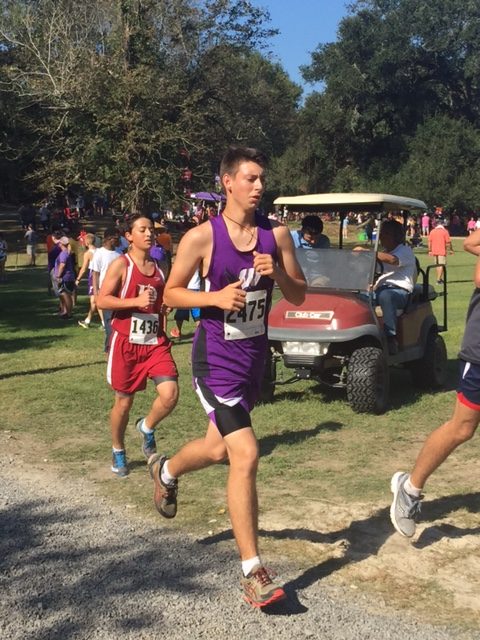 Marking this weekend as cross country’s mid-season race, Woodlawn is pushing past their bounds for astounding times. Starting the morning strong, the girls set the bar high with four new personal records. Coming in first and second for Woodlawn with a close finish were Alexis Martin (22:37) and Melissa Grant (22:38; PR). Following were Aimee Martin (26:48; PR) and Kelli Oubre (27:15; PR), both of which are also competing in their first year of cross country. Finishing off the team’s female varsity race were Alexis Aucoin (30:41; PR) and Shelby Sanchez (31:16). These girls both exhibited the true meaning of teamwork with Shelby encouraging Alexis to meet a new personal record.

Woodlawn’s boys have also been working towards noteworthy finishes with two new personal records. Khidir Al-Mustafa (17:31), finished first for our team, steadily reaching for a new male personal record for the school, impressively motivating his peers to accomplish their goals. Soon after Khidir came Brandon Williams (18:52), portraying a fluidity that is seemingly natural which has furthered his abilities of strength and endurance. Finishing next were Marshall Bayles (19:15; PR) and Sauloman John (19:50) who are seen to be pushing each other in practices every day.

Rounding out the boys’ varsity race for Woodlawn were Joshua Stephens (20:22; PR) and Logan Fontenot (23:56). Joshua sprinted to the finish line with a smile on his face, as always, showing his inspiring motivation to continue to set new personal records.

Logan, bringing his heart into the race against all odds, finished with only 35 seconds separating him from a new personal record. Running for his late cousin Conner this season, Logan has dedicated himself and his season with cross country to Conner’s remembrance. Touching the hearts of all that watched this weekend, Logan has exhibited a strength that is admired and strived for by his teammates. From all of the cross country team and those that have continued to support Woodlawn as a whole, Logan has a strong family of people that will always have his back.

Next weekend, Woodlawn will be attending a meet in Walker, offering a much needed change in scenery.