Come Heck or High Water: Floods Can’t Stop These Students and Their Robots 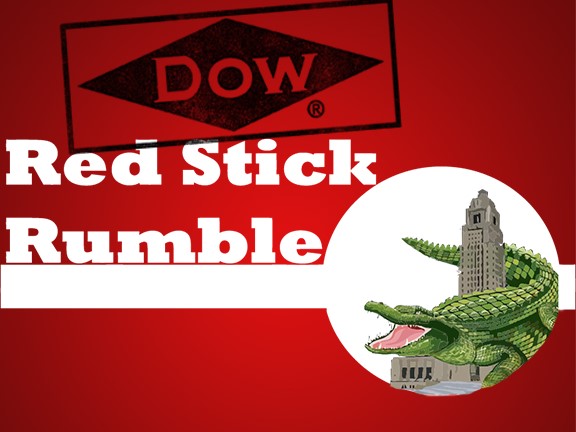 Robotics teams from Louisiana, Mississippi, and Texas will be arriving at Woodlawn High School to bring relief supplies and support for their competitors at the fourth annual Dow Red Stick Rumble, an off-season FIRST® (For the Inspiration and Recognition of Science and Technology) Robotics Competition and Festival sponsored by Dow Chemical and the East Baton Rouge Parish School System.

On August 27th, the gym of Woodlawn High School will be transformed into a medieval playing field where teams will compete with their 120lb robots to scale defenses and capture their opponent’s castle. Each high school team had only 6 weeks to work with mentors and coaches from their community to design and build their robot. The public is invited to attend, free of charge, to witness the spectacle of giant robots battling it out for their chance to win the Red Stick Rumble trophy and to tour the pits and see the magic of robot construction and repair.

Teams will also be bringing backpacks filled with school supplies, toiletries, and toys for those affected by the 2016 flood. Many teams are attending despite their members losing homes and properties in the rising waters. Some teams, like TorBotics from Hammond Magnet High School are competing even though their school was flooded.

“It’s not just about robots,” said Carolyn Arthurs, FIRST® Regional Director of Louisiana and Mississippi, “The fact that these students are coming together to support each other, when many of them are in desperate need themselves, embodies the true spirit of FIRST.”

Doors open to the public at 8AM with competition lasting until 4PM. Food will be provided by Newks and the Woodlawn High Snack Bar. Louisiana teams from Baton Rouge, Boutte, Duson, Hammond, Lafayette, New Orleans, Port Allen, and Slidell as well as teams from Texas and Mississippi will be in attendance.

As a Strategic Sponsor of FIRST® Robotics and the Title Sponsor of the Dow Red Stick Rumble, Dow Chemical is working through their Dow STEMtheGap™ initiative to improve the infrastructure of STEM throughout the state and nation.