The Panther football program surprised some in the state of Louisiana during the COVID-shortened 2020 football season. The Panthers, led by second year Head Coach Marcus Randall, finished the season by hosting a first round playoff game. Although Woodlawn High fell short in that game, they far exceeded most expectations by ranking in the top 16 of the LHSAA Class 5A Power Rankings. 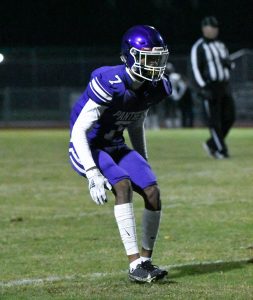 Members of the Class 2023 helped supply the Panthers with lots of offensive firepower and many defensive stops. Quarterback Rickie Collins and cornerback Jordan Matthews were two student-athletes that excelled on the field in the fall. At the conclusion of the season, the pair was named to the 2020 District 5-5A All-District team. However, the recognition that the two received did not stop in the fall.

Both Matthews and Collins have since received several scholarship offers from colleges around the country. Matthews was the first to receive an offer, from SEC West member-school Mississippi State. That offer came in early January, and was quickly followed by and offer from the University of Virginia only three days later. Florida Atlantic University was the third school to offer Matthews.

“I knew that I would eventually get offers, but I had no idea that they would come this early,” said Matthews. “I also realized that getting the offer was not the ultimate goal, so I have to continue to outwork others to continue to succeed.”

Not to be outdone, Collins was the next out of the pair to receive an offer. He didn’t just receive one or two offers, Collins received three offers in a two and a half week period. The University of Memphis offered, followed by the University of Arkansas. Virginia Tech offered Collins a scholarship two days after Arkansas. 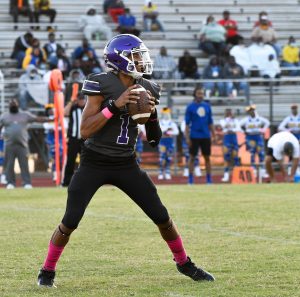 “The Class of 2023 is full of really good quarterbacks in the state,” said Collins. “I knew that some of them had already received some scholarship offers, but I knew that my offers would eventually come. Most athletes don’t get any offers until their junior or senior year, so I knew that mine would come when it was my time.”

Collins and Matthews both acknowledge their excitement at receiving interest from major college programs. They were both able to point out what led to this interest.

“First, our intelligence is high. Both on the field, and in the classroom,” explained Matthews. “We have high field IQ, and we also have high GPAs.”

Matthews, who is a student in the Great Scholars Academy, carries a 4.6 GPA. Collins, who takes traditional classes, carries a 3.5 GPA.

“I want to piggy-back off of what Jordan said, and add that we also have a lot of people in our corner,” said Collins. “Our coaches and family have always had our back, and always helped promote us.”

As the discussion with Collins and Matthews continued, the two student-athletes continually brought up their teammates.

“Football is a team sport, and the two of us aren’t the only reason that we have a chance to be a good team,” said Matthews. “We need everyone to contribute to the success of the team. We have a lot of talented players on both sides of the ball in our class.”

Offensively, offensive lineman Roy Brackins and wide receivers Clayton Adams and Tramon Douglas were mentioned multiple times. Defensive linemen Devyn Jones and Devin Boyd, along with defensive backs DJ Delmore and Dawaun Harris, are defensive players from the class of 2023 that Collins and Matthews talked about.

“Roy is going to be next. His size, smarts, and athletic ability on the offensive line are getting him attention already,” said Collins. “Clayton and Devin and Devyn will get some (scholarship offers) as well. Hopefully schools coming to see us will notice all of the other talented players that are on the field.”

The attention that Collins and Matthews bring to Woodlawn High will, undoubtedly, bring higher expectations. The two understand that, and are ready for it.

“Our expectations are to win championships. Anything less than that is a failure, in my eyes,” said Collins. “We have all the tools; players, coaches, and support. I realize that I have to be the leader, I have to work harder than everyone else, and that will lead my teammates to work harder.”