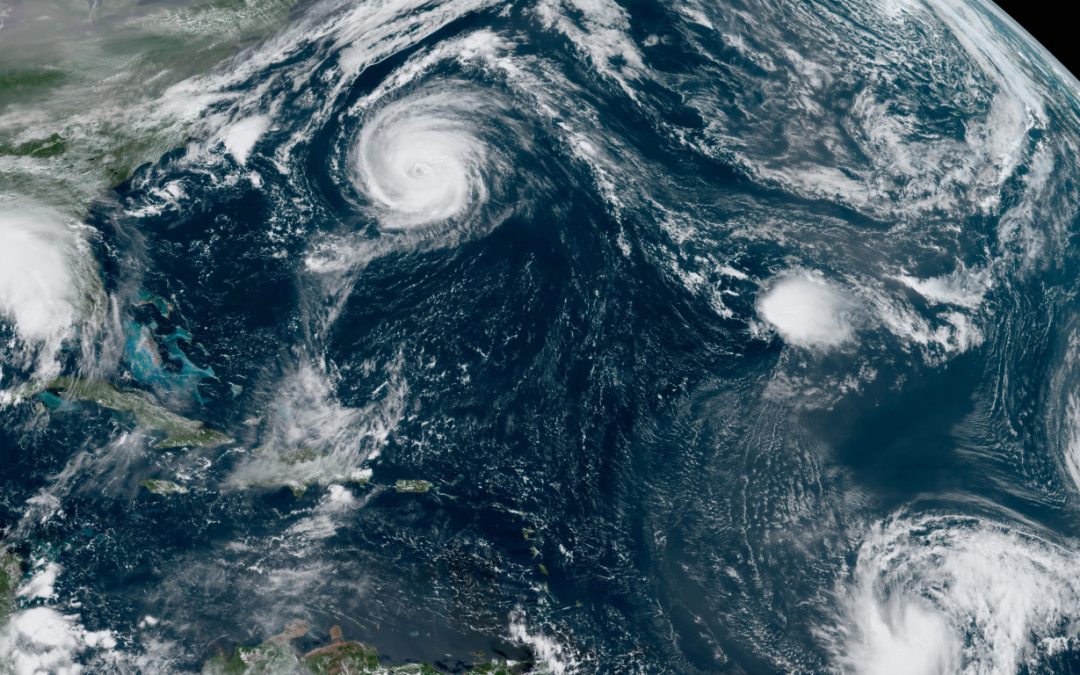 Coby Sanchez is a 2019 graduate of Woodlawn High School. This article was originally published in the Spring 2021 Southeastern Magazine. The article was written by Sheri Gibson and photos are by Randy Bergeron. You can see the original article by clicking here.

Southeastern student Coby Sanchez has turned a fear of storms into a passion for understanding them and sharing information to help others—becoming “Southeastern’s first meteorologist.”

When Southeastern freshman and Baton Rouge native Coby Sanchez was a small child, storms were the boogeyman. As the wind roared and the tinny sound of rain reverberated off the windows and roof, little Coby would become more and more frightened, the outside world seeming to slide into dangerous, uncontrollable chaos. “Momma, I don’t want there to be a tornado!” he would cry inconsolably.

Then in 2008, Coby experienced a storm that would forever change his life: Hurricane Gustav. Gustav tore across Hispaniola, Haiti, Jamaica, and Cuba before making landfall in the U.S. near Cocodrie, Louisiana, as a category two hurricane. It lashed the Gulf Coast, creating about $6 million (in 2008 dollars) in damages in the U.S., 1.5 million power outages in Louisiana alone, and a spark in one local boy who lived through it.

After hours of white-knuckled fear, watching towering trees fall and roofs ripped off of homes, the pounding rain and roaring winds finally subsided—and Coby knew that if he were to ever conquer his biggest fear, he would have to better understand it. Eventually, instead of cowering from storms, he would seek them out, chasing them and studying their mysteries. No longer just to put himself at ease, and above even an unquenchable thirst for more knowledge, his ultimate mission has evolved to help others better prepare for and survive the wrathful monsters that so terrified him as a child. 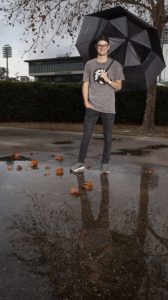 “The importance of studying storms and meteorology to me is saving lives,” said Coby. “As humans, we’re curious about nature. We want to have a visual within a storm to see what’s going on, what’s happening. But being prepared and preparing other people, residents in cities and states that will be impacted, that’s the whole point of meteorology. Because these are dangerous storms. They can take lives. I’d love to help prevent that.”

Over the ensuing years, Coby has pursued countless storms, from riding them out and investigating their aftermath to studying their characteristics and patterns from afar. While still in high school, he even received certification as a National Weather Service (NWS) SKYWARN® storm spotter, a program that, according to NWS, allows volunteers to “help keep their local communities safe by providing timely and accurate reports of severe weather to the National Weather Service.” He additionally shares the information that he gathers as a certified member of the Spotter Network.

Coby plans to one day turn his passion for storm chasing into his career, informing mass audiences by becoming a meteorologist and television weatherman, hopefully even following in the footsteps of renowned Weather Channel on-camera meteorologists like Jim Cantore and Tevin Wooten. So when it came time to begin choosing a college, the opportunities presented by Southeastern and the Southeastern Channel—winner of over 400 awards since its inception in 2002 and the only university channel in Louisiana to have ever won an Emmy, let alone have done it 20 times—immediately caught his attention. The Southeastern Channel has won first place in the nation 11 times at the National Student Production Awards given by College Broadcasters, Inc. and has been named “Best Television Station in the South” eight times by the Southeast Journalism Conference. Southeastern’s strong reputation of caring was also a plus for Coby.

“I heard a lot of great things about Southeastern,” said Coby. “At Southeastern, in my experience, they care. They definitely care to help and better you as a student and as a person for the future.” 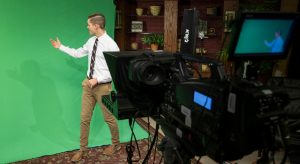 So in the fall of 2020, as the most record-breaking hurricane season ever recorded was still gearing up, Coby enrolled at Southeastern.

The Southeastern Channel, which Coby knew would be the perfect way to gain invaluable, hands-on experience while also sharing some of his own expertise, did not currently have a weather segment. Undaunted, he approached Southeastern Channel General Manager Rick Settoon about incorporating one.

“I’ve always wanted to have a weather segment for student training and experience at the Southeastern Channel, especially for those who would like to do the weather, and a lot of things have come together to make that happen,” said Rick. “One is having a student who’s knowledgeable enough about weather with a strong career focus of becoming a TV meteorologist, someone who’s dedicated to developing a regular segment. Coby has that laser focus and can become the real trailblazer in this regard.”

Rick and Coby are partnering together to begin building a program for adding weather segments to the Southeastern Channel, identifying and learning the appropriate programs, tools, and approach. Since Coby is not yet a certified meteorologist, he will convey rather than create weather predictions in order to effectively bring local forecasts and weather reports to Southeastern students and the surrounding community.

“I tell students all of the time that at the Southeastern Channel our mission is to help make their dreams come true,” said Rick. “We’ve done that for students who’ve become professional news anchors and reporters, sportscasters, producers, writers, directors, videographers, editors, and filmmakers. We plan to do that for Coby with weathercasting. So it’s the perfect fit.”

Although he’s still in his first year at Southeastern and the weather segment at the Channel is still taking shape in development, Coby, who plans to one day round out his experience at Southeastern by attending meteorology school, has already learned a great deal.

“Working with the Channel has given me first-hand experience of working for a news channel. That’s the closest I’ll get until actually landing a job like that,” he said. “It’s taught me how to work programs like Premiere Pro, which is a computer-based program for video editing. And most importantly, it’s taught me to be more open and step out of my comfort zone. Because when interviewing people or anchoring segments, you can’t be scared. You’ve got to just do it. And if you mess up, you keep going.” 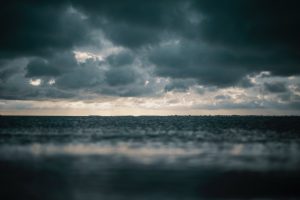 “A weather segment will help students like Coby who plan to eventually attend meteorology school and also those who can get jobs at local stations where they don’t require a meteorology degree to do weather,” said Rick.

In addition to helping build the weather segment so that future students with a similar passion can also gain such an experience, Coby dove into the chance to capture the historic, seemingly endless, 2020 hurricane season, reporting on Hurricane Zeta from the field for the Channel’s Northshore News program. He chased a total of five hurricanes that came into the Gulf and was in Hurricane Sally and Hurricane Zeta as the eyewall actually came ashore.

While the season was one that he will definitely never forget, his venture into Zeta was particularly eventful. Coby described how, despite careful planning, downed equipment left him and his aunt, who shares his love of storm chasing, to ride out the hurricane in their vehicle.

“I went to Slidell and was getting some footage for the Southeastern Channel, and a Doppler radar temporarily lost signal, so I was not able to get that radar feed from my velocity radar like I wanted. By the time it updated and came back online, it was too late. The eyewall was hitting, so we had to pull over at a gas station near the Twin Spans. And when it hit, it came with a punch. There were winds that topped off at maybe 100 miles per hour. I was actually planning on getting out to get footage for the Channel of me in that wind. I could not open the door. I actually tried using my feet to open it. I could not push the door. The car was shaking.”

With nothing else around but a gas station, Coby and his aunt moved to hunker down behind the gas station, away from the awning which Coby feared could be snapped off and lifted away like an umbrella at any moment.

Despite the precarious situation that Coby found himself in during Zeta, which certainly also caused some nail-biting worry and fervent prayer on the part of his parents, Coby did say that safety is at the top of his mind when planning to go out into a storm.

He begins the process by watching the news, checking the radar, plotting where he will be and where all of the exits and alternate routes are, and checking to see which radars he will use and if any are damaged or out of service. Food, water, and battery for recharging his phone are packed. Throughout the storm he uses RadarScope, which has two radar feeds—velocity radar for understanding the wind speed and identifying spinups or tornados and a precipitation depiction for seeing the rain. 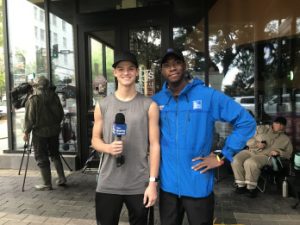 Coby mentioned that there is always an unpredictable aspect to storms, which is why preparing as much as possible is so important. However, it’s also part of their beauty. “It’s always a new experience with each storm. Each storm has its own feeling—own unique aspect, or character, within it.”

By the time it was over, the 2020 season produced 30 named storms, 13 hurricanes, and 6 major hurricanes (with top winds of 111 mph or greater). Records were broken for the most named storms, the most named storms to make landfall in Louisiana (five), the strongest storm (Hurricane Laura) to hit Louisiana since 1856, the first time a hurricane eye has passed over New Orleans in more than half a century (Hurricane Zeta), the most storms to form in a single month (five in September), only the second time in history forecasters had to move to the Greek alphabet for names, and more.

Coby has experienced and tracked other storms, including being caught in a few isolated tornados and interviewing survivors in the aftermath of an EF4 tornado in Southern Mississippi. But hurricanes remain the most intriguing to him. And he sees plenty of opportunities in the future for studying them.

“For future hurricane seasons, or any type of weather, I do think they could potentially get stronger over time,” commented Coby. “I think it will be years, maybe even decades, but I do believe climate change and global warming will eventually fuel future hurricanes. I think they will strengthen in size and category. I believe even the way meteorologists predict the weather or the way we learn about the weather could eventually change.” 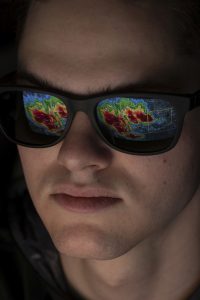 But for now, Coby is continuing to soak in all he can about meteorology while gaining real-life experience on how to effectively inform others of what may lie ahead.

“I wake up, and I’m excited to go to work and learn something new,” Coby said of being at Southeastern and a part of the Southeastern Channel. “I’m excited to get this thing started, working on the green screen and eventually adding that weather segment. It’s a dream come true.”

Through a yearning for knowledge and a desire to help others, Coby has transformed his dark, incomprehensible monster of wind and water into what appears to be a radiant and deeply fulfilling future.