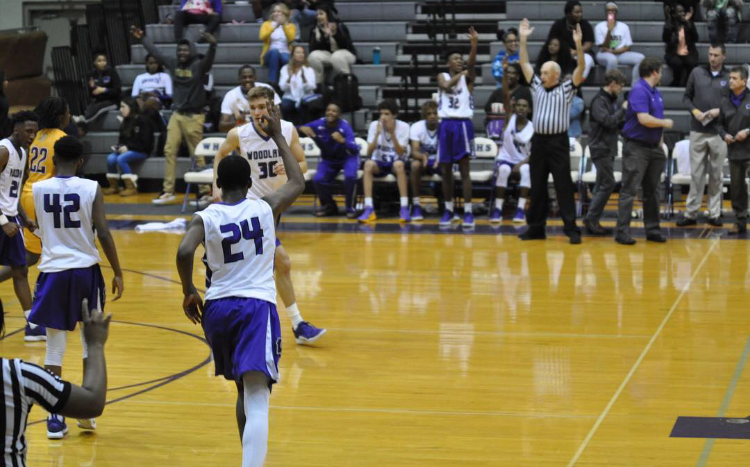 Playing in the playoffs for the first time since the 2012-13 Season, the 26th ranked Panthers traveled to 8th ranked Lakeshore High School in Mandeville. The Titans had won 26 times out of 30 games entering the playoffs. However, Friday would be the underdog Panthers’ night, as they came away with a 60-54 victory.

The Panthers struggled to get going early, starting the game off 0 for 5 from the field and falling behind the Titans early shooting success. Junior Jeremiah Walter started off the scoring by converting a layup off of a turnover. Woodlawn would go on to make 5 of their next 7 shots, with seniors Devaughan Gross scoring 7 points and Daryl Drewery scoring 5 to finish out the first quarter leading 16-12.

The Panthers continued their early success when sophomore post player Brandon Cook caught the ball in the middle of the Titans zone defense and found Drewery for a three-pointer to stretch the Panthers lead. They would get a Noah Howard put-back layup and another shot by Drewery early and then hit a scoring drought with only a couple free throws the rest of the second quarter. A timeout by Coach Elmo Fernandez tried to stop the home teams run at 25-27, but the Titans would add one more score forcing the visiting Woodlawn Panthers team to go into halftime trailing 25-29.

Though it was a team defensive performance, the key defensive performers were Cook and Howard as they held the Titans leading scorer, 6’8’’ Hunter Dean, to only 1 point through 3 quarters and only 1 field goal for the game. The Panthers were led by their two seniors, Gross and Drewery, who each scored 22 points to propel the Panthers to their first playoff win since the 2011-12 team beat Barbe at home. The win gives the Panthers the chance to host another top 10 team, the 9th ranked Franklin Parish Patriots.