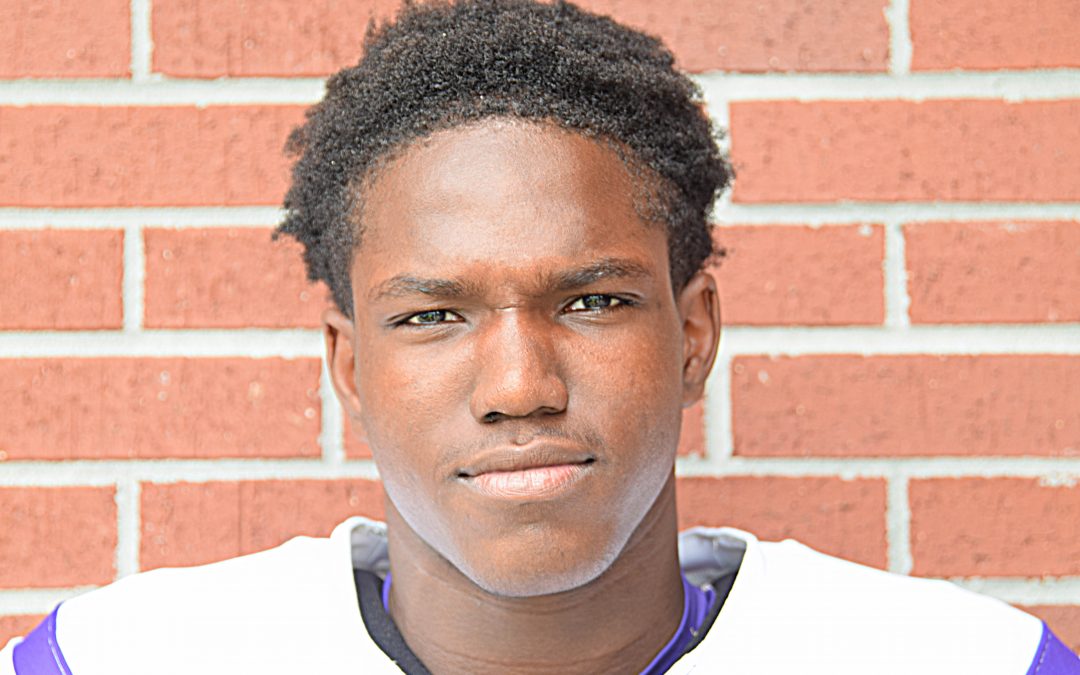 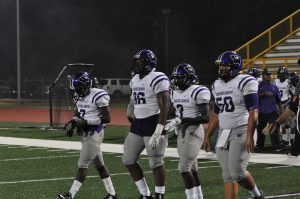 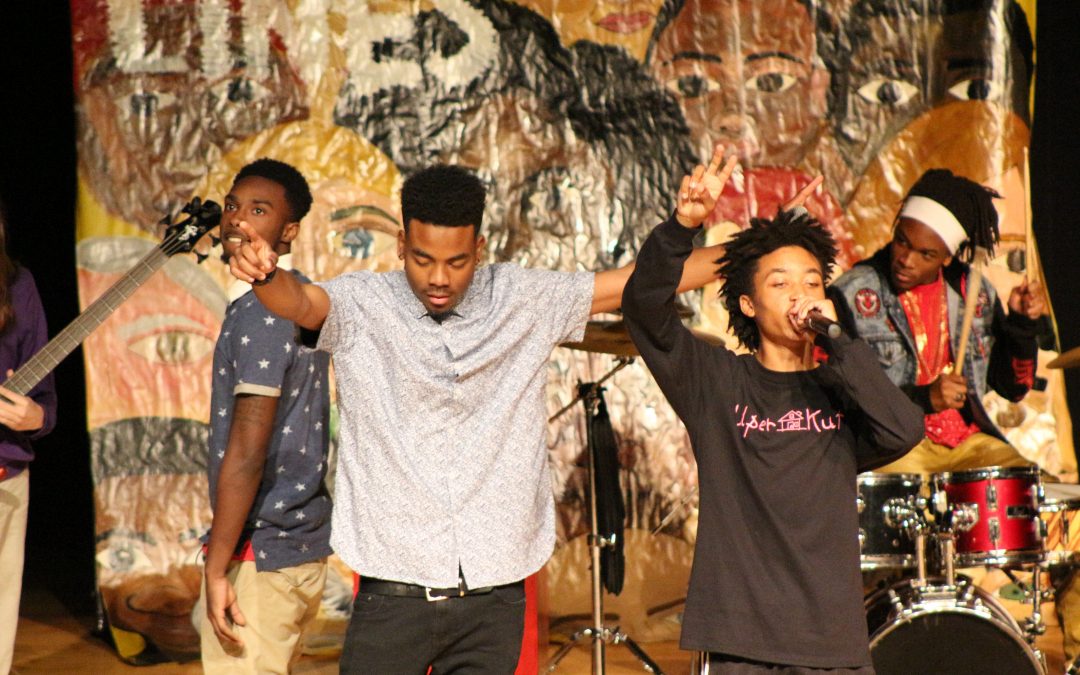 These kids are amazing. And we didn’t recognize it. Not soon enough, at least. Not until they were almost gone. Luckily for us, Tarquin Kenner came around.

Kenner, a 24-year old paraprofessional at Woodlawn High School, brought an idea from his alma mater, Destrehan High School, to his new profession at the south Baton Rouge school. He came to coach football, but quickly saw something that so many others did not see.

He saw talent. He saw students that needed a platform. He decided to give it to them.

Kenner chose to sponsor the Culture Club. The idea came from the St. Charles Parish high school which he called home for four years. After getting permission from administration to start the club, he reached out for help. Malakah Hawkins, a social studies teacher, was up for the challenge.

With the help of Hawkins, Kenner began recruiting students.

“This was something that I decided to do based on what we did at Destrehan High. I felt that it was a positive influence on my life, and it was something that I could pass on to the younger generation,” explained Kenner. “It wasn’t easy at the beginning. Kids didn’t really want to be a part of it. ‘What’s that? What are we going to be doing?’ I heard all the excuses in the book. But then, Jeroderick bought in, and he was able to bring more people into it.” 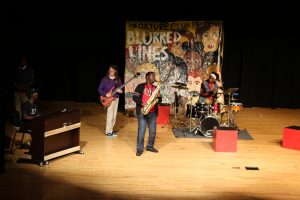 Students perform as part of “Cypher’s Corner” during the opening of Blurred Lines.

Jeroderick Allen is an 18-year old senior at Woodlawn. Allen had been at Woodlawn since his freshman year, but had nothing to look back upon fondly. He saw Kenner’s plan as a way to change this. Allen was asked what he saw in Kenner that made him want to be a part of the Culture Club

“I saw a vision that would allow us to bring something to Woodlawn,” Allen said. “Coach brought the idea to us, and I was like, ‘Yea, it’s going to be a good move for Woodlawn, period. This club could be a positive influence on students here. It could change the way that others look at us.’ The whole vision of seeing talent come together and doing good things, that’s what I really told people about to get them involved and draw them in.”

The formation of the Culture Club was just the beginning. The group began having sporadic meetings. Kenner quickly found students that he became close to. These students are now the heart of the club.

The step teams came next. They quickly spawned from the Culture Club. The Suave Kings and the Alluring Queens, collectively known as the Royal Panthers, were born. Practices began after school in November. Lunch performances came next, followed by halftime shows at basketball games and a performance in Woodlawn’s Fine Arts program, “All the World’s a Stage.” Kenner and the Royal Panthers began thinking about their next step.

“Once the Royal Panthers began performing in public, I decided that maybe they were ready for a bigger performance. Members of the Culture Club also started coming to me about a program for Black History Month,” described Kenner. Members began discussing the idea of a performance at one of the now regular meetings. The idea was brought to Mr. Stevens, Woodlawn’s principal. After he agreed to the plan, the group got to work. Blurred Lines was born.

Allen expounded on the genesis of Blurred Lines.

“Everyone brought something to the table,” he said. “The program made sense being that February was coming up. It was little bits of everybody. Ms. Hawkins and Coach Kenner brought everyone together, and the program belonged to everybody. It was a whole team.”

Sure, the Culture Club was ready to produce the show. But would this be enough? Could the students convince others to join?

“Most of us that performed today were Culture Club members, but we had to get some other students to help out with the production,” said Keon Simmons, a 17-year old senior at Woodlawn High. “Trevon (Hardnett) was one of the first we got to commit to the program.”

Simmons and other Culture Club members reached out to friends that they knew had talent.

“Everyone here has some type of talent, and we wanted to put as many people as we could into the program to show off all of our talents,” Simmons said. “We just knew we needed to put them together.”

Hardnett was approached, but was skeptical. 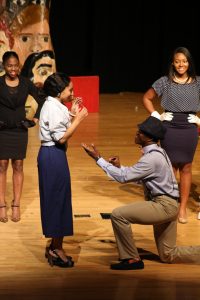 Kerrington Hill “proposes” to Briana Jacob as part of the Fashion Show during Blurred Lines.

“Right off the bat, I didn’t think it was going to turn into much,” Hardnett explained. “I wasn’t ecstatic about doing it. I was happy they reached out to me though. They came to me, and asked me to help, so I was happy that they gave me a chance to do something with them.”

Hardnett did not know what his contribution to the program would be. This changed one day after school, when he and Alton Morgan, another 18-year old senior, were “vibing out in class.” Simmons and Morgan had previously worked together, and knew they wanted to perform together in front of the school. It wasn’t until Morgan and Hardnett began singing that day that their performance started to come together.

“Trey and I started bouncing ideas, and he started singing this hook, and I was like, ‘Yea, I like that, I can write to that,’” explained Morgan. “We matched. So I presented the idea to Keon, and he was like, ‘We can put a band behind it.’ So we decided to do a whole live performance.”

Simmons knew exactly where to go from that point. He approached Meshak Muyaka, a 17-year old junior in the Woodlawn band. Muyaka quickly got other members of the jazz band, the Smooth Purple Groove, to join the project. Treyln Miller, a 19-year old senior, was recruited to play the drums. Brennan Burleigh, a 16-year old junior, played bass, and Cody Coleman, an 18-year old senior, played guitar. Muyaka played piano. The group was ready to perform.

Muyaka wrote the music, mainly by just listening to Morgan and Hardnett. Once he heard the melody, he says it was easy to create the chords.

At a practice, Allen heard the group performing, and says the vibe just fit. He joined the group, playing the saxophone. The chemistry was there, and it wasn’t long before Hawkins decided that this performance, which the group was calling “The Cypher’s Corner”, would open the Black History Performance.

From there, Hawkins and Kenner worked to complete the remainder of the program. Students from the Culture Club combined with artists, musicians, dancers, and others from the school to perform dances, spoken word, a monologue, a fashion show, and a one act play. In total, over fifty students performed in Blurred Lines.

“It was easy to help create this awesome program, because the students that were apart of Blurred Lines were amazing. They had so much heart and dedicated so much time to making it a success,” explained Hawkins. “I loved giving the students a platform to showcase their own original pieces.” 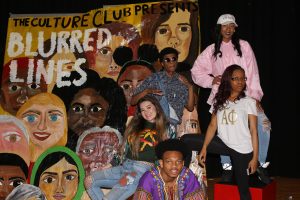 Students from the Fashion Show pose after the performance of Blurred Lines.

Members of the Culture Club were also quick to point out help from other students who did not perform.

“Mr. Sorenson and his theater department had a great deal of involvement. They had a huge part in putting the production on,” said Muyaka. “Grayson, Matthew, and Wesley Livingston all ran the lights and sound for the program.”

Grayson Barrett is a student in one of Woodlawn’s Theater Design and Technology sections. Matthew Jobborn and Wesley Livingston just enjoy doing light and sound as a hobby. Livingston plans on taking Theater Design next year. The students even allowed freshman Javier Allen, another student in Theater Design and Technology, to run the lights for the second half of the performances after stepping with the Alluring Queens. They were happy to help the younger student learn the ins and outs of producing lights for a production of this magnitude.

“Derwinisha Alford and Sadie Boudreaux, they did the majority of the Blurred Lines painting that was on stage,” added Morgan. “I helped with some of the painting, but they did that painting.”

The group also raved about the pictures taken by senior Krissy Danh. Danh, a transfer from Baton Rouge Magnet High School, explained that many students on campus have talents, and she was just happy that she was asked to be involved and help capture the heartfelt emotion of the performers.

Muyaka perhaps said it best when discussing the talent that came together to present Blurred Lines.

“Everyone has some type of talent,” added Danh. “Blurred Lines showed that.”

Now, we see these kids doing things. We see them making moves. And, man, are we lucky.

All pictures for this article were provided by Krissy Danh. 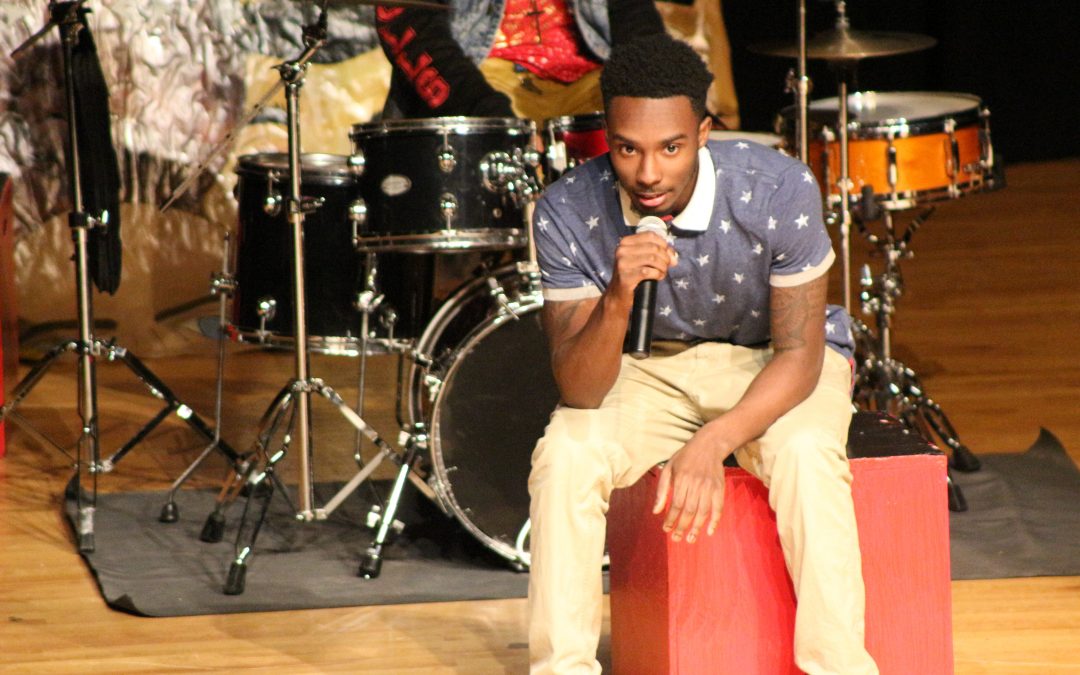 Diamond-Alexis Craig and Troy Pierre II opened the program as the “Master and Mistress of Ceremony.” The first performance was called “The Cypher’s Corner” performed by Jeroderick Allen, Cody Coleman, Trevon Hardnet, Treyln Miller, Alton Morgan, and Keon Simmons. It was amazing!

The other performances included the Decades Fashion Show, from Civil Rights Period to the New Millennium, performed by the Culture Club, The Komplexion by Kerrington Hill and CyTierrione Williams, Fences Monologue by Destiny Hall, an Original Poem by Derwinisha Alford, Black Royalty by Da’Shona Woods, and a Theatrical Poem called “Black Child/ I am A Women” by Paris Hishaw and Nitiqua Johnson.

I thought this program was amazing and beautiful; Woodlawn High School has some very talented students. I would like to thank Coach Kenner and Ms. Hawkins for sponsoring this amazing program, and also thank our principal, Mr. Stevens, for letting us do something like this for the first time ever.